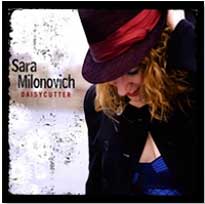 Fab fiddler Sara Milonovich rosins up her bow for her latest solo album and proves that there’s a lot more to her considerable musical talents than initially meets the ear.

Yes, of course, she’s a marvelous fiddler, as anyone knows who has seen and heard her play with such Nippertown favorites as the McKrells or John Kirk & Trish Miller and Quickstep. She’s also been in big demand as a session player recently, lending her fiddle talents to albums by Richard Shindell, Antje Duvekot, Jen Clapp, Anne Hills and Cathie Ryan.

And, of yeah, she also played on Pete Seeger’s latest Grammy Award-winning album, “At 89.”

On this album, Milonovich dazzles with some fine, fleet-fingered fiddling on instrumental gems like “Fiona’s Breakdown,” “No Sweat Helene,” “The First Snowfall” and “The Lake Arthur Stomp.” And she matches her instrumental talents with some sparkling contributions from an A-list of guest musicians including Viktor Krauss, Mike Marshall, Lloyd Maines, Natalie Haas, John Doyle and others.

But Milonovich stretches way beyond the usual round of traditional fiddle tunes on this album, and her vocals are in the spotlight as much as her fiddle. An excellent vocalist, she gets to the heart of the matter on songs like the opening “Country Life” (about the plight of the modern day farmer) and the heartbreaking waltz “Insanity Street.”

It may not be surprising to find her dipping into Eliza Gilkyson’s songbag for the beautiful ballad “Last Dance,” but you probably wouldn’t expect her to find her raiding the catalogs of Peter Gabriel, K.T. Tunstall and even the Monkees. (It’s an accordion-fueled romp through Carole King’s “Pleasant Valley Sunday,” in case you’re wondering.)

But no matter what she’s tackling, she does it up right here.