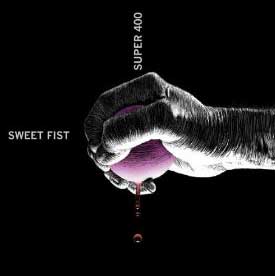 Remember the glory days of the power trio? When Cream rose to the top, and we all rejoiced as we went Mountain climbing?

Troy trio Super 400 have been blasting the message for some time now, and that message comes through loud and clear on “Sweet Fist,” by far the best album yet from these most dedicated, never-say-die rockers.

Recorded at the legendary Ardent Studios in Memphis, the album kicks off with the pummeling “Needle Down” and doesn’t look back. Kenny Hohman is just a monster guitarslinger – dig his filigree-riffing intro to “FFMN” – but it’s his wailing soul-soaked vocals that bring this album home.

Not that this is monochromatic, monolithic sludge-stompin rock from start to finish. Friday wrestles the microphone from Hohman for the sensual, hook-filled “Flashlight,” and Hohman unplugs for some acoustic ballad finger-picking on “Devil Song.” There’s even a straight-up rockin’ re-invention of Carole King’s “I Feel the Earth Move.”

These dozen tunes put the “super” in Super 400, and there’s just no denying the depth, the dynamics and the unbridled desire that these three musicians bring to the table this time around.

“Sweet Fist” won’t be officially released until Tuesday, September 15. But trust us, you don’t want to have to wait til then. So enter to win an autographed copy of the new album from your pals at Nippertown.com. Just go here for details.

And don’t forget: Super 400 celebrates the release of their new CD, “Sweet Fist,” with a sneak preview hometown party at Revolution Hall in Troy on Friday, September 11.

Don’t Miss: Five for the Fall