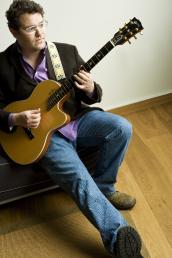 Last Friday, Reid Genauer was down at the Bearsville Theater in Woodstock, doing a solo show as the opening act for Phish’s Mike Gordon.

This Friday (September 18), he’s back with his bandmates in Assembly of Dust, and the jam-band favorites are kicking off their fall tour with a show at Revolution Hall in Troy.

And be sure to check back right here at Nippertown.com tomorrow for your chance to win a free copy of Assembly of Dust’s new album, “Some Assembly Required.”

Earlier this week, Genauer took a moment to chat with Nippertown.com about Assembly of Dust, their approach to recording and music in general:

Q: We weren’t able to get down to Woodstock last week for your show with Mike Gordon at Bearsville Theater. How did it go? Did you guys get to play together at all?

A: It was fantastic. The room is beautiful, the people who run it are great. It was a special night. I was joined by Todd Isler for three songs (the drummer in Mike’s band) that night during my set. He played some really cool global percussion kind of stuff. A couple nights later though in Virginia, Mike joined me for a version of Gillian Welch’s song “Back in Time” during my set ­- the two of us strumming acoustic guitars, very cool. He also had me up for a couple tunes with the band – a real treat.

Q: Assembly of Dust seems to be taking an offbeat road to recording. The first album was originally a solo record, wasn’t it? Then there was the live “The Honest Hour.” And the series of “instant” live albums. So you didn’t really get around to making full-fledged studio albums until 2006’s “Recollection” and now the new “Some Assembly Required.” Was this all a plan?

A: I don’t think I consciously set out to take a non-conventional approach to releasing records. It just sort of played out that way. The driving factors have been 1) looking for ways to bridge the gap between the energy of the live performance and the process of album making and 2) in the absence of creating that bridge in terms of energy and “in the moment” playing,­ the desire to make a consciously crafted album ­- something altogether separate from the live show. We have tried our hand at both methods a couple times. 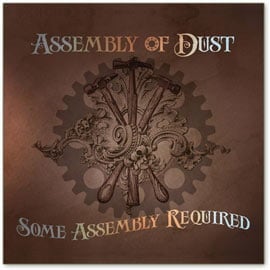 Q. With “Some Assembly Required,” were you at all nervous that all of the A-list guest stars on the album might over shadow the songs? Or your own band’s performances?

A: A little, yes.­ I have heard collaborative albums that come out sounding like cheesy duets or a collection of Frankenstein songs featuring the guests. To avoid that end, I really thought long and hard about what guest was appropriate for which song. Additionally, we tried to allow them room to express themselves within the structure of the song, rather than creating some unwieldy musical appendage. Finally, I credit the guests themselves with helping us avoid that. They are all very mature players and were very empathetic to the songs they played on. They contributed in very appropriate ways.

Q: “The Honest Hour” was recorded live at Revolution Hall in Troy, and now you’re coming back on Friday to kick off your fall tour. What is it that’s special to you about Revolution Hall?

A: Good beer. Good folks. Great name. We ARE starting a revolution, after all.

Q: Will any guests be dropping by Revolution Hall on Friday to sit in?

A: I was hoping Bill Clinton might make it out, but he was busy with a session with Fleetwood Mac. Truth is, we’re not expecting anyone, but yah never know.

Q: How do you feel about Assembly of Dust being categorized as a jam band?

A: I don’t have any problems with the term “jam band.” It’s a little broad and unspecific, and I know that some folks – especially the press – hear “jam band” and run for the hills. But we know who we are, our fans know who we are and frankly, the press seems to understand who we are. We have gotten some great reviews thus far by writers that are not always particularly kind to jam bands. There are definitely some more descriptive ways to describe our music – a mix of alt-country, folk rock and roots rock. If you can spare more than seven letters, I think you can do better than “jam band,” but, hey, I guess I am cool with people calling us whatever they want, as long as they are calling us!