Annea Lockwood: Take me to the river… 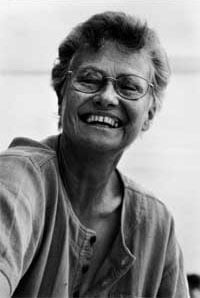 Annea Lockwood was born nearly 9,000 miles away in New Zealand, but she is on more intimate terms with the Hudson River than most of us who have lived near its banks for our entire lives.

During 1980 and 1981, composer and sound artist Lockwood explored the length of the Hudson, stopping at 15 different sites along the river to collect tape-recorded sound samples of the water. Commissioned by the Hudson River Museum in Yonkers, she wove the recordings together into a captivating two-hour audio installation, “A Sound Map of the Hudson River,” which became part of the museum’s permanent “Riverama” exhibit in 2003.

A condensed, 72-minute version of the installation has also been issued on compact disc by the adventurous, NYC-based new-music label, Lovely Music, Ltd.

Lockwood describes the work as “an aural journey from the source of the river, Lake Tear of the Clouds in the high peak area of the Adirondacks, downstream to the Lower Bay and the Atlantic.”

She explains, “Since 1970, I have recorded rivers in many countries, not to document them, but rather for the special state of mind and body which the sounds of moving water create when one listens intently to the complex mesh of rhythms and pitches.”

Although she had been collecting river recordings for years, “A Sound Map of the Hudson” was the first time that Lockwood had tackled an entire river from top to bottom, from the Hudson’s source high in the Adirondacks to its terminus in the bustling New York City harbor.

“Each stretch of the Hudson has its own unique sonic texture, formed by the terrain, varying according to the weather, the season and, downstream, the human environment, whose sounds are intimately woven into the river’s sounds,” Lockwood says. “Tracing one single river was really fascinating. There’s such a tremendous variety of sounds to the Hudson.”

Over the years, Lockwood has installed “A Sound Map of the Hudson River” at locations around the world from New Zealand to England. It was in Nippertown this past July at a free103point9-sponsored event in Athens as well as two years ago, when Lockwood brought it to the Brick Elephant in Valley Falls for a week-long engagement.

Now “A Sound Map of the Hudson River” is back in the Capital Region, this time at the Tang Museum at Skidmore College in Saratoga Springs. The installation is the latest of the museum’s “Elevator Music” series, and through March 14, it can be heard – in the museum’s elevator.

“Yes, it’s in the elevator,” she explains with a smile. “That’s where they put their sound installations. It’s quite a bit of fun, really.”

At the Tang Museum at 7pm on Thursday, September 17, Annea Lockwood will join artist Margaret Cogswell and curator Ian Berry for a conversation and panel discussion on the topic of “Recording the Hudson.” Admission is free.

And if you’d like to hear more of Lockwood’s river-work, you don’t have to go far. Her most recent sound installation, “A Sound Map of the Housatonic,” had its world premiere earlier this month at the Lichtenstein Center of the Arts in Pittsfield, Mass. as part of the group exhibition, “Jump In!” which will remain on display through Saturday, October 31.