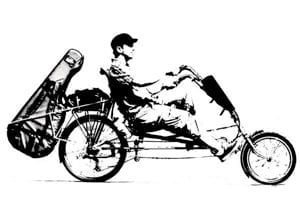 Singer-songwriter Peter Mulvey is out on the road promoting his new album, “Letters From a Flying Machine,” on the Signature Sounds label, and he’ll be making a stop at Caffe Lena in Saratoga Springs on Sunday, September 20. The album is an intimate collection of songs interspersed with spoken-word excerpts of letters that Mulvey has been writing for his nieces and nephews.

“My first niece was born nine years ago, and on that very day, I wrote her a letter,” Mulvey recalls. “Over the years, I just kept it up with her and the other ones as they came along. At first I wasn’t sure why I was writing letters to kids who couldn’t even read yet, but pretty soon, I figured out that I was writing to their future selves. Each letter is a kind of time capsule.”

In keeping with the theme of the album, Mulvey is taking an intriguing approach to his tour – he’s doing it by bicycle.

“No matter what you do, it’s worth asking yourself if you can do it differently, if you can do it more sustainably. Can I bike to work? Even if ‘work’ takes me a thousand miles?,” Mulvey asks. “For me, that’s a question that’s been challenging and very, very fun to answer. And it’s a question each of us owes it to future generations to ask.”

Actually, this is Mulvey’s third annual bike/concert tour, but this one is especially challenging – 10 shows in 17 days across 1100 miles. He kicked it all off in Grand Rapids, Michigan on Wednesday, September 9, and he’ll carry on through a show at the Iron Horse Music Hall in Northampton, Mass. on Saturday, September 26.

Fellow singer-songwriter Brianna Lane is also travelling the entire tour by bicycle as Mulvey’s opening act. Bolstered on much of the route by a few other cyclist friends, Mulvey and Lane are travelling with all their gear, without a support vehicle.

You can follow Mulvey and Lane’s “Long Haul Tour” on Mulvey’s blog.

And just in case you’re wondering, Mulvey is performing in Syracuse tonight, and he’ll have to pump out 141 more miles from there to get to Saratoga Springs in time for Sunday night’s performance.