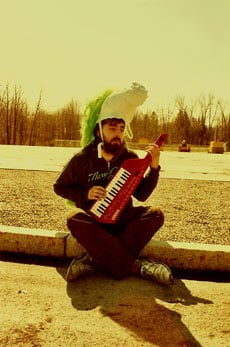 The Silver Screams is a solo musical project of Bryan Hamill, who is also a member of Todd Is New Each Moment, the Amazing Plaid, Coma, Zahnarzt and probably a couple of other bands, too.

The Silver Screams’ debut album is titled “All Summer in a Day,” and it’s about to be released on The Rev Records.

“All Summer in a Day” is the Silver Screams’ follow-up to the six-song digital-only holiday EP, “Don’t Bogart the Eggnog,” which was released last December, also on The Rev Records.

Culled from two years’ worth of Hamill’s home recordings, the new album features 17 songs including “You Shouldn’t Be Swimming Today,” “Old Blind Octopusss,” “Knitting With Thimbles” and “Song Not About My Father or Poland.”

“I would like to say it mixes all forms of modern music,” Hamill says. “There is so much varied instrumentation that the album is more like a variety show than it is a genre piece, though I hope that I did manage to keep a cohesion throughout.”

The CD release party for the Silver Screams’ “All Summer in a Day” takes place at Tess’ Lark Tavern in Albany at 8pm on Saturday, September 26. Also slated to perform during the evening’s festivities are Todd Is New Each Moment, the Nightmare River Band and Gay Tastee & the Destroying Angel. Admission is $5.

Stories From a Bar #48, Alex Magnan of Young Culture

Playing for a culture, ‘Kingfish’ Ingram has earned the…