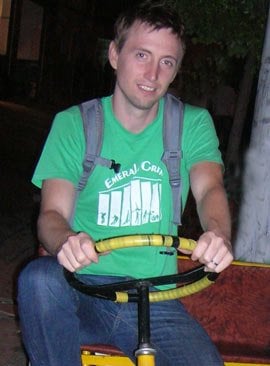 1. THE FIRST ALBUM I EVER BOUGHT WAS … The first CD I ever bought with my own hard-earned cash was Led Zeppelin’s “Houses of the Holy.” Not their best, but I was a sucker for the drumming on “D’yer Maker.”

2. THE FIRST CONCERT THAT I EVER SAW WAS … The first concert I ever remember seeing was my uncle Kieran playing with Emmylou Harris at an outdoor festival somewhere.

3. THE FIRST MUSICAL INSTRUMENT I EVER OWNED OR PLAYED WAS … The violin – I knew I wanted to play it the first time I heard it.

4. THE FIRST SONG THAT I EVER PERFORMED IN PUBLIC WAS … I remember playing “Silent Night” solo in church on Christmas Eve when I was six or seven. I had to be propped up on a box in order to be seen.

Mat Kane and his bandmates in the Doc Marshalls will step into the spotlight at Caffe Lena in Saratoga Springs on Saturday night. Tern Rounders will share the bill.