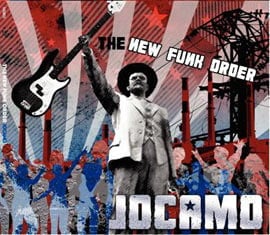 I mean really down!

Soul man supreme Dave Macks and his funky bunch are back for more, and once you drop the needle on this one, you’re gonna have a damn hard time getting off the dance floor.

Macks – the man who put the “stomp” in the Stomplistics – is in fine, fine voice, howling and pleading his way through a dozen crackerjack original tunes guaranteed to set your ass to shakin’.

This ain’t no collection of paint-by-numbers funk, either. You can hear the ghost of Frank Zappa in several tunes, including the opening volley of the title track, the wonderfully wobbly, wah-wahed “Dolamite” and the deep-dish groove of “It’s Afrolistic.” There’s plenty of George Clinton’s outrageousness here, too. And the wry humor of the advice-to-the-lovelorn “What Would Barry White Do?” is so much more than just a novelty tune.

Jocamo is without question one of the very finest, funk-fueled combos in the Land of Nipper. In addition to bassist-vocalist Macks, bandmembers Tony Perrino (various keyboards), drummer John Lapi, percussionist David Macejka and the guitar tandem of Marc Sullivan and Matt Hatfield all are afforded plenty of room to strut their stuff – from the satin-smooth glide of “It Ain’t Perfect” to the slide-guitar-fueled straight-up blues blast “Hellbound Train” that closes the album.

But the band is also to be commended for taking it to a new level with some key special guest appearances. Zydeco torchbearer C.J. Chenier brings a high-stepping second-line strut to “I Wanna Know,” while saxman Keith Pray blows the roof off of “Gonna Work This Time.” And soul veteran Jill Hughes – who celebrated the release of her own solo debut album “For the First Time” just last week – teams up with Macks for one of the album’s brightest highlights, “A Love Beat Down” in classic soul-duet style worthy of Marvin Gaye and Tammi Terrell.

Jocamo celebrates “The New Funk Order” with a CD release party and performance at Jillian’s in Albany on Friday, September 25. The Getdown shares the bill.