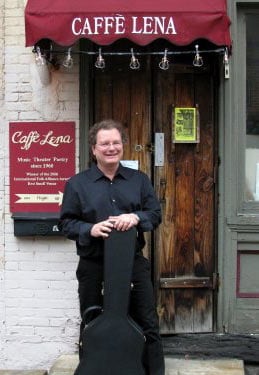 Saratoga Springs singer-songwriter Michael Jerling has been making records for nearly 30 years, which means that those early albums were honest-to-goodness vinyl records.

It also means that he’s been making music for long enough that it’s time for him to take a look back and survey his repertoire. So, yes, you could call this album a career retrospective, except that Jerling certainly isn’t ready to sit back and rest on his laurels.

Rather than taking the easy way out and slapping together old tracks for a greatest-hits or best-of compilation, Jerling decided to revisit some of his favorite tunes and record them anew in one of his favorite settings – that cozy little second-floor coffeehouse on Phila Street, Caffe Lena.

The recording took place in a single evening’s performance just three months ago on June 30, and Jerling brought along a couple of ace musicians and longtime friends – bassist Tony Markellis and keyboardist-accordionist Teresina Huxtable (who also happens to be his wife) – to back him up.

And Jerling didn’t skimp on the music. For the album, which clocks in at more than 70 minutes, he culled 18 of his finest original tunes full of poignant poetry, wry humor and some rock ‘n’ roll heart. Many of the tunes were selected by fans on his email list. The touching, small-town tribute to aging dreamers, “Bush League Hero,” is the oldest tune on the disc, dating back to 1975. It doesn’t sound one bit dated.

The album also features one brand new song – the earnest but genuinely moving ode to Saratoga’s legendary coffeehouse. “I should probably be wearing my Greek fisherman’s hat for this one,” Jerling explains to the amused crowd by way of an introduction. “This is way folkie, way folkie. I’ve never written anything like this before. It’s a hootenanny.”

Accompanied by Markellis and Huxtable, Michael Jerling returns to the scene of the crime – Caffe Lena in Saratoga Springs – for his CD release party and performance tonight (Friday, September 25). Indeed, there certainly is music here toinight.

Song of the Week: Is Your Love Strong Enough