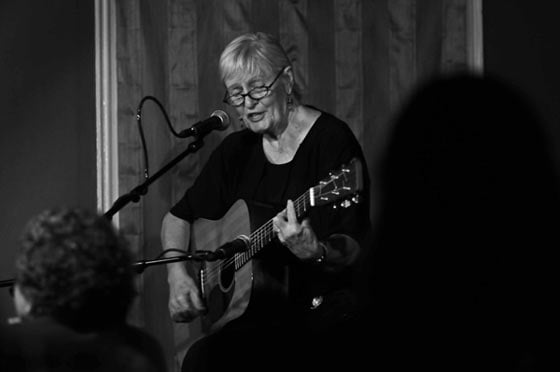 There were songs and stories aplenty, as Rosalie Sorrels held the full house spellbound at Caffe Lena on Sunday evening. Tales about befriending the late great bluesman the Reverend Gary Davis at an early 1960s Newport Folk Festival. And hanging out through the years with Hunter S. “Mr. Fear & Loathing” Thompson. And chumming with legendary poets Allen Ginsberg and Lawrence Ferlinghetti in San Francisco.

She’s earned the name of “The Travelling Lady,” and Sorrels has been there and done that during her long and illustrious time on this planet. Done more than most of us will ever do in our own lifetimes. At Lena’s, she made it all seem as real as today. And lucky we are that we can hear her tell her tales.

The open-hearted Sorrels spoke honestly and openly of writing a song about her precocious, 14-year-old daughter (now in her early 50s) and of the recent visit of her 21-year-old granddaughter, who came to see Sorrels perform in NYC, taking in the sights and sounds of the Big City with child-like wonder.

In another song, she evoked the heartbreak of her youthful son David’s suicide those many years ago, performing the song that she wrote in the aftermath. A song that she couldn’t bring herself to perform all these many years – until now.

And even at the age of 76, Sorrels hasn’t really slowed down – either performing or recording. “Strangers in Another Country” – her most recent album and heartfelt tribute to her longtime kindred spirit, U. Utah Phillips – garnered her a Grammy nomination earlier this year, and she is the subject of a documentary film that’s still in the works.

There in that cozy, intimate performance space on Phila Street in Saratoga on Sunday evening, the Grand Dame of the Folk World may have forgotten a few words to a couple of the many songs that she’s written over the decades. But the audience didn’t care. And they were happy to sing right along.

And, oh yes, she still lives in a log cabin in Idaho with her second husband, but that’s another whole bunch of stories for the next time Rosalie Sorrels comes back to Nippertown… 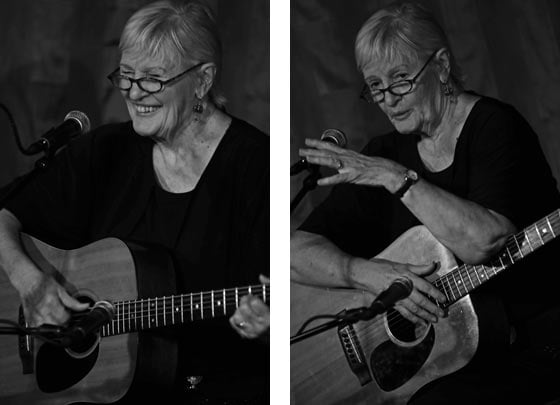