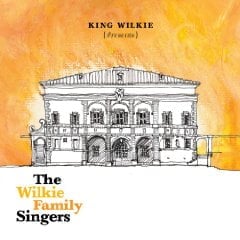 I don’t think this is bluegrass anymore, Toto.

King Wilkie started off as a young, six-piece traditional bluegrass band in Charlottesville, Virginia back in 2003, and they garnered the coveted International Bluegrass Music Association award as Best Emerging Artist in 2004. They were playing all of the big bluegrass festivals and even the Grand Ole Opry.

But with their sophomore album, “Low Country Suite,” the music began to mutate, and now with their third album, the bluegrass has nearly been completely jettisoned. Heck, “Videotape” sounds like the Beach Boys, and “Dr. Art” features a wicked, jazzy clarinet solo.

That’s not a bad thing, mind you.

Band co-founder/multi-instrumentalist Reid Burgess and the rest of King Wilkie still have roots music in their blood, even though they’ve relocated to New York City. On this album, the core band has surrounded itself with such special guests as David Bromberg, Peter Rowan, John McEuen and Abigail Washburn.

But there’s so much more than just roots music going on here that it’s difficult to know where to begin. “The Wilkie Family Singers” is something of a concept album about a fictional (and perhaps somewhat dysfunctional) family led by Beaufort Wilkie. But there’s no plotline or dialogue; it’s more like a collection of musical autobiographies, although if there really is a unifying thread, it’s seems rather tenuous.

So if you’re expecting bluegrass, you’re gonna be disappointed. But if you’re looking for ambitious, genre-crossing music from a band that’s willing to defy expectations, King Wilkie wants to introduce you to Beaufort and his family.

King Wilkie brings their cast of characters to The Linda on Saturday, October 3, sharing the bill with the utterly charming Brooklyn roots combo the M Shanghai String Band.