Patty Larkin, What Was the First Album You Ever Bought? 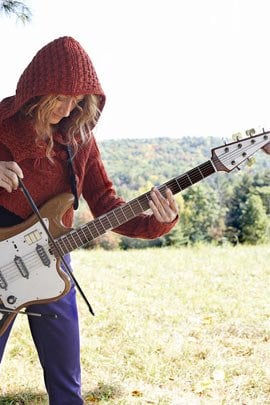 “I think the first record that I bought was a 45 of ‘Eleanor Rigby’ with ‘Yellow Submarine’ on the other side.

Album-wise, I think it was probably Joni Mitchell. Music sort of filtered in and out of the house – and I listened at friends’ houses – but she was probably the first person that I got turned onto and felt that she had a whole new slant on this whole songwriting business that was both decidedly female and very musical. She had a sense of humor, and the music was very interesting.

I had probably already bought some Simon and Garfunkel albums or something. You know, we’re talking the ’60s here. So I was already writing songs at the time, but they were more like angst-ridden songs by an adolescent who had no life experience, but wanted to write as though I did.

When I heard Joni Mitchell, I thought, ‘Oh, that’s what I want to do. That’s very cool.’ ”

Patty Larkin teams up with Lucy Kaplansky for a singer-songwriter double-bill at the Eighth Step at Proctors in Schenectady. The performance begins at 7:30pm on Friday, October 2 in Proctors’ GE Theatre.

Jug Stompers On the Air