All About Pete Seeger’s Banjo 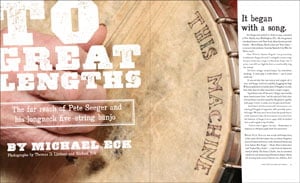 Chances are that you know Tom Lindsay and Michael Eck as musicians. They play together as the Lost Radio Rounders, formerly the Gospel Train. (Mister Eck also commands the jug/mandolin chair in Ramblin Jug Stompers and performs solo, as well). And recently, LRR have been performing their new themed program, “American Favorite Ballads: The Songs of Pete Seeger,” around Nippertown at such venues as The Linda in Albany and Old Songs in Voorheesville.

And the two definitely know what they’re talking about when it comes to the legendary Seeger. You’ll know what I mean if you pick up a copy of the new issue of The Fretboard Journal, a prestigious quarterly magazine that’s actually more like a book.

Lindsay and Eck contributed a marvelous feature story about Seeger’s iconic longneck banjo to the Fall 2009 issue of the journal. Lindsay (who teaches a course in American music history) took the photos and Eck (a nationally recognized music writer) penned the text.

The story is titled “To Great Lengths: The Far Reach of Pete Seeger and His Longneck Five-String Banjo,” and it’s chockful of great full-color photographs, plenty of detailed history and insights from Seeger himself. In addition, the story is accompanied by additional in-depth stories about Seeger’s 12-string guitar and his famous instuctional book, “How to Play the 5-String Banjo.” Altogether, Lindsay and Eck’s contributions total up to 16 full pages.

The issue of Fretboard Journal (number 15, if you’re counting) features Wilco’s Jeff Tweedy on the cover. Also included in the magazine are a look at the guitars of the Lawson Bros., a peek into the guitar workshop of Rick Kelly and an fascinating interview with Alison Brown conducted by Abigail Washburn.

The magazine is available locally at Guitar Center, Borders and Barnes & Noble.