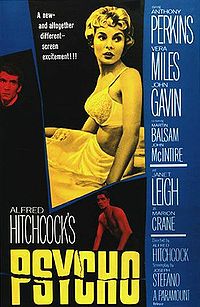 Albany’s Palace Theatre is screening Psycho on Monday, October 5 as part of their classic movie series. Here’s your chance to see this Alfred Hitchcock’s 1960 masterpiece on the big, big screen.

The Master’s most notorious film is still terrifying after all these years, as the larcenous Janet Leigh picks the wrong place to spend a night – The Bates Motel, run by a peculiar little man and his crotchety “mother.” Hitchcock’s murder set pieces are so potent, they can galvanize (and frighten) even a viewer who has seen them before! Bernard Herrmann’s legendary and endlessly imitated score only adds to the thrill and excitement!

Here’s the rest of the schedule of the Monday night series. All films begin at 7 PM with classic trailers and cartoons.

Tickets for all movies are $5 for adults and $3 for children and are available in advance at the Palace Theater box and via Ticketmaster Charge-by-Phone: 518-476-1000 and Ticketmaster outlets or online at ticketmaster.com.

Stick to Your Guns / Stray from the Path / End / Stand Still