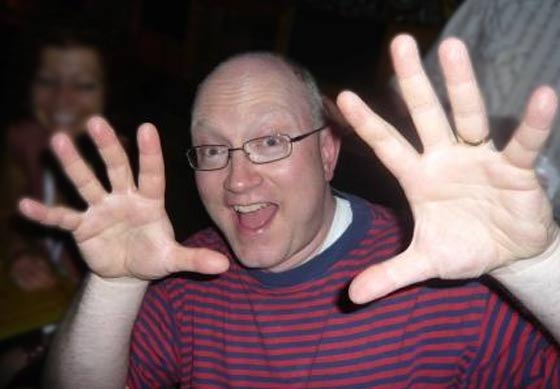 On July 7, 2007, a new radio station took to the airwaves. From the very beginning, WEXT FM – otherwise known as Exit 97.7 – has offered a dizzyingly eclectic variety of music and staunch support of the local Nippertown music scene.

With the station’s second big fund-raising concert slated to take place on Friday, October 23 at “the Exit Dome” – actually the WMHT-TV studios in the Rensselaer Technology Park – we decided to find out more about Chris Wienk. Not only is he the man behind the microphone during the station’s afternoon broadcasts, but Wienk is also the driving force behind the whole radio station:

Q: How did you first get started in radio?
A: I was 13 years old and basically repeated everything the booth announcers on TV used to do (they used to do those between program announcements live!). That lead to me making music playlists, and recording radio shows on a portable cassette player.

They were hideous! But they were fun. I went to Buffalo State College and helped put one of the coolest radio stations ever on the air. It was an AM carrier current station at 620, heard only on campus. We brought the Buffalo area a new FM station, resurrecting the call letters WBNY.

Q: What were you doing before you took over at WEXT?
A: The other part of my job is to oversee all of WMHT’s radio services, including RISE – our radio information service for the print handicapped, and WMHT-FM, the classical station.

Q: How did WEXT get started?
A: WEXT rose out of the former commercial classical station, WBKK. We assumed the license and set out to figure what the community really needed in terms of great radio. We landed on the idea of a station that would play music that cannot be heard on radio elsewhere.

Q: How do you view the current state of radio?
A: Loaded question. I think there are some standouts around the country. They’re not all non-commercial, public stations, but most are. Without slamming what others do, I think each corporation has had to think through how to make entertainment into a business that can be profitable. In the process of doing that, these corporations have stripped away some of the things that make radio so special. The lack of originality of thought from market to market has really made a lot of cookie cutter stations. What works in other markets may work here, but that’s not really the point of this. Is it? I have always believed that the best radio comes from here and is made especially for here – wherever here is.

Q: Since the radio station had been previously playing classical music, did you consider doing one of those big attention-getting switchovers where you play some iconic song over and over for 24 hours?
A: We thought about it. We did do something to help the listeners of that station find another station – WMHT-FM by playing the same classical work over and over, but we really didn’t have many brain cells left back then. It would have been smarter to start by playing some iconic song that would signify the change.

Q: What song would it have been?
A: Wow! I should have seen that question coming at me! Are we done yet?

Personally, I would have been torn between “Radio Clash,” or “Radio, Radio,” or maybe “Let the Day Begin,” or perhaps we could have chosen the song that would have been one of our biggest that summer from Spoon’s “Ga Ga Ga Ga Ga” album. Probably, we would have had to take more time to think that out.

We did make our first hour full of music like those songs that were special and signified some change to something unique, different, and diverse.

Q: Instead, you launched the station by playing the Kamikaze Hearts‘ “Ash Wendesday” – an album cut by a local band. What were you thinking?
A: We were thinking we had to launch with our pledge. We decided that we were going to be really different from any “alternative” station by putting local music into every single hour we program. When we thought about all the songs we knew of from the Local 518 scene, we thought it should be a relatively recent song. The thinking continued that it should be one of the biggest bands around.

Sadly, they were kinda on hiatus at the time, but Kamikaze Hearts came into our life. We listened to “Oneida Road,” and we fell in love. To this day, I still try to get them to reunite. They had a unique combination of talents that produced divergent music that really spoke to the sound and style that we at WEXT want to convey to listeners.

Listening to “Oneida Road,” led to “Ash Wednesday” being played over and over, and it became a no-brainer. Musically, that song was our iconic launch song. To this day, when I hear it, I cannot help but think fondly to the day when we launched Exit 97.7. It was so long ago (not even 2.5 years, but…)!

Q: What kind of a statement do you think that made?
A: We hope it made the statement that we love local music. We hope it shouted that we would be different, and that you could count on Exit 97.7 to try things that nobody else is willing to try.

Q: Why is homegrown music – or the Local 518, as you call it – so important to WEXT?
A: Local 518 was settled on to help us talk about local music. Sometimes you have to make your life a little easier, right?

Local 518 music is so very important to WEXT because it helps us develop a great space where artists can live and flourish. I think that having a radio station committed to playing the music from the community helps us be a radio station from here, designed for here. Playing local music fosters a love for our community. There are so many incredibly talented people here. We don’t just have to know what’s going on on the anti-folk scene in London, or the bayou blues sound of the south, or the indie rock scene in Brooklyn. We have a scene here, and it needs to be showcased along with all those other scenes from around the world.

Q: WEXT not only supports a diverse community of local musicians, but it also gives voice to the music fans, the listeners. I think my favorite show is “My Exit.”
A: Cool! We love “My Exit,” too. It has helped us stay in touch with the music the local music fans want to hear. Plus, we’ve been turned on to new music, we’ve been reminded of great old tunes we forgot, and it’s great fun to hear what people have to say about music. In addition to that, Dave Michaels and I love to meet new people, and interact with our listeners.

Q: As a public-supported radio station, you’re working on a shoestring budget. How can listeners help out the station?
A: 100% of the money that runs EXT comes from the community. As we’re non-commercial, most of that comes from listeners. Music fans from around the community have been uniting and giving individual contributions, and putting forth challenge grants to help other listeners decided to support the music. It’s been very gratifying to hear from people who are so touched by the music as they make contributions. It
really is a labor of love, and the listeners who love it are helping with that labor. Some listeners give money and get things like CDs, and tickets to events and concerts.

Q: Tell us a little about the upcoming benefit concert at the Exit Dome and how people can get tickets.
A: We had our first “Exit Dome” concert last January, and it was a gas! Lots of work, but so much fun! We were asked when would we do another event. Things started to fall into place when we heard from Super 400 that they were interested in helping us raise money to run the station.

So, on Friday, October 23 at 7:30pm, we’re going to have a great concert with Sarah Pedinotti and Chris Kyle from Railbird, Eric Margan & the Red Lions, Sean Rowe and Super 400!

We hope that we’ll have a full house again. People can get tickets when they contribute $60 to the station’s fund raiser. That gets a pair of tickets.

Q: WEXT has been on the air for nearly two and a half years now. Looking back, are you pleased with the progress that the station has made?
A: Oh yes, but we have so much more we want to do. We really want to involve the community more, and do more things on air and in the community with our groovy listeners! We want to help present more concerts throughout the region, and we want to extend ourselves and partner with many people and organizations to help improve the community and make even more room for great artists like those of the Local 518 that we play every hour on the station.

We want to help the Capital District become known as a place to be for super cool music – both the Local 518 and a place where the hottest new bands all want to come play. The more we foster this great music scene, the more people we think will want to be involved with this great community.

This desire to do more is why we have our feedback form on the site, and we are always soliciting that feedback. We know we have some good ideas, but the great ideas are still out there and perhaps in the hands of others in the community. So, let’s make Exit 97.7, WEXT the best radio station you’ve ever heard – together!