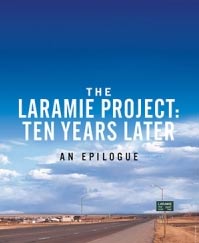 Monday, October 12 marks the 11th anniversary of the death of Matthew Shepard, a gay student at the University of Wyoming, who was tortured, tied to fence post and left to die.

His murder and its effects on the community was the subject of the the highly acclaimed play “The Laramie Project,” which since 2000 has been one of the most performed plays in America. On Monday, theaters around the world will simultaneously premiere a compelling and groundbreaking epilogue to the original play.

A staged reading of “The Laramie Project: 10 Years Later (An Epilogue)” will be performed in New York City at Lincoln Center’s Alice Tully Hall and more than 100 other theaters across the country in all 50 states, Canada, Great Britain, Spain, Hong Kong and Australia on Monday, October 12.

Written by Moisés Kaufman, Leigh Fondakowski, Greg Pierotti, Andy Paris, and Stephen Belber of the Tectonic Theater Project, the new play focuses on the long-term effect of the murder of Matthew Shepard on the town of Laramie, Wyoming.

“The Tectonic Theater Project set out to find out how Laramie had changed in the ten years since the murder of Matthew Shepard. When we arrived, we were forced to confront the question, ‘How do you measure change in a community?’ One of the things we found when we got there, which greatly surprised us, was people in Laramie saying this was not a hate crime,” said Moisés Kaufman, Artistic Director of Tectonic Theater Project.

In the Greater Nippertown area, three productions are scheduled to be staged on Monday.

As part of its new Firestorm Series, Capital Repertory Company will present a staged reading of the new play at 7pm Monday, in conjunction with the Albany Center of the Capital Region. Cap Rep will also offer a student matinee at 12noon on Monday. The evening will begin with a pre-show reception at 6pm. Following the presentation there will be a discussion moderated by Benita Zahn.

The same production is also scheduled to be presented at the Arts Center of the Capital Region in Troy at 7pm on Monday, October 19. Tickets are $20 for the two evening performances with a discount to subscribers and members. Tickets for the student matinee are $5.

And Barrington Stage Company in Pittsfield, Mass. will be offering two performances of the epilogue – at 3 and 7pm on Monday, October 12. Directed by Richard M. Parison, Jr., the presentation will feature an all-star cast of actors from recent BSC productions, local celebrities including Berkshire Living Magazine editor Seth Rogovoy and Ryan Weightman from Pittsfield’s Office of Cultural Development, as well as Debra Jo Rupp (seen this past summer in “True West” at the Williamstown Theatre Festival, but best known as the mother on the hit TV sitcom “That ’70s Show”). Tickets are $15; students $10.

Sean Rowe on the Road in the UK