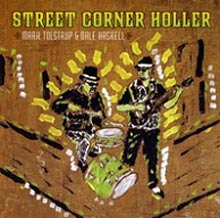 Over the top of some bold, slashing slide guitar and some hummin’ Hammond organ, Dale Haskell bellows “Don’t look down, there’s blood on the floor.”

When an album opens this way, you can feel in your bones that these guys mean business.

Saratoga Springs guitarist-singer Mark Tolstrup has unleashed some fine solo blues recordings over the years, but since teaming up with drummer-singer Haskell (of the blues ‘n’ more trio No Outlet), he’s taken the music up to the next level.

While the duo offers up plenty of blues heat, it’s not all slash ‘n’ burn stuff. There’s the funky, New Orleans-style gospel of “Glory, Glory” (with some wailing vocals from MotherJudge and beautiful bottom-end tuba by Dave Sokol). A gorgeous acoustic glide through Skip James’ “Hard Time Killin’ Floor,” a gritty, foot-stompin’ rendition of Son House’s “Preachin’ Blues” and, of course, the requisite Dylan cover (an ominous blues-burn through “It Takes a Lot to Laugh, It Takes a Train to Cry”).

But the bulk of the generous 14-song album comes from the pens of Tolstrup and Haskell, and their originals are what really make this album a standout. Tolstrup’s chugging resonator-fueled train tune “Empire State” is a highlight, as is Haskell’s haunting “Death Don’t Disappoint Me,” which resonates with echoes of Rodney Crowell’s best work.

Street Corner Holler gets down and bluesy at the Jonesville Store in Clifton Park at 6:30pm Friday, October 16. Admission is free.