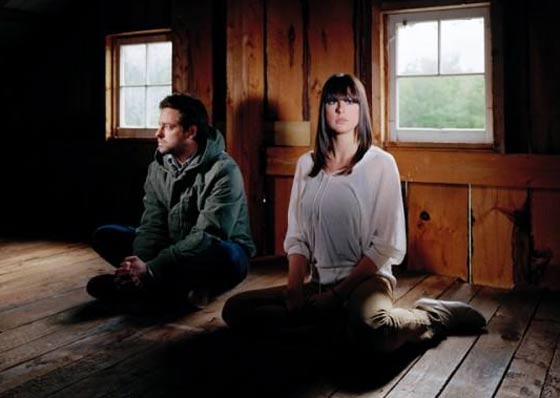 Congrats go out to Saratoga Springs electropopsters Phantogram, who announced earlier this week that they’ve signed a record deal with Barsuk Records.

“BARSUK SIGNS PHANTOGRAM [12 Oct 2009]
Phantogram’s music sounds like it’s made by a band from the city. Electronic loops, hip-hop beats, shoegaze, soul, pop — each finds its way into their songs. Unexpectedly, the band calls the town of Saratoga Springs, NY (population 26,186) home. But Josh Carter and Sarah Barthel, the duo that make up Phantogram, have flourished in Saratoga. In fact, the town itself isn’t rural enough for their taste — they drive almost every day another 45 minutes into upstate farmland to a barn they call Harmony Lodge to write and record. Serving as their homemade studio/practice space/think-tank/bat-cave, the barn is equipped with various samplers, tapes, records, synths, drums and both percussive and stringed instruments, and it’s there that Phantogram allows their natural surroundings and metropolitan influences to meld together creating beautiful, beat-driven dreamlike pop songs.”

Phantogram’s debut album for Barsuk is slated for release on February 9. Titled “eyelid movies,” the album will feature the following 11 songs, including four that were previously available on the duo’s debut self-titled EP, which was released in the spring:

Mouthful of Diamonds
When I’m Small
Turn It Off
Running from the Cops
All Dried Up
As Far as I Can See
You Are the Ocean
Bloody Palms
Futuristic Casket
Let Me Go
10,000 Claps

Other bands on the Barsuk label roster include Death Cab for Cutie, Mates of State, Ra Ra Riot, Rilo Kiley, the Long Winters, John Vanderslice and the Wooden Birds, among others.