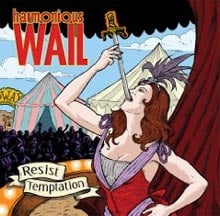 Here’s an interesting and quite delightful entry from the ever-expanding Gypsy jazz front. This Madison, Wisconsin foursome fearlessly ventures forth without a violin – gasp! – featuring only bass, guitar, mandolin and female vocals/junk percussion.

Mandolinist Sims Delaney-Potthoff leads the charge, having learned his lessons well not only at the Berklee College of Music, but also from seven years of studying with the late great Jethro Burns. The addition of his wife, Maggie Delaney-Pottoff, as the band’s primary vocalist adds just the right balance to the string snappin’, finger-poppin’ instrumental mix.

Ex-Flecktone harmonicat Howard Levy wails on the instrumental “Posh de Wash,” but what really sets the quartet apart from the rest of the rapidly growing Django-inspired pack is their repertoire, as the band takes a largely successful foray into more contemporary covers from the likes of Tom Waits, Steely Dan, the Velvet Underground and the Band.

Here’s their unique take on the Velvet Underground’s “Who Loves the Sun”:

Harmonious Wail slips into Caffe Lena in Saratoga Springs on Saturday, October 17, sharing the bill with the Hudson Valley’s own Bernstein Bard Trio.

Song of the Week: I Call Your Name