BANG A GONG: Evelyn Glennie will perform James MacMillan’s concerto for percussion and orchestra, “Veni, Veni Emmanuel,” as guest percussionist with the Sao Paulo State Symphony Orchestra at the Troy Savings Bank Music Hall on Saturday night. Presented by the Troy Chromatics, the concert begins at 8pm preceded by a talk at the Rensselaer County Historical Society at 7pm.

With more than two dozen solo percussion albums to her credit (and a Grammy as well), Glennie will also conduct a percussion master class at the College of Saint Rose’s Massry Center for the Arts in Albany at 10am Sunday. The student performers will be Daniel Gonzalez, Brian Ballard, Carolyn Stallard and Kevin Cross. Admission is free and open the the public.

Percussionist Andy Blanco, who is playing in the pit for the touring production of “The Color Purple” at Proctors in Schenectady, grew up in Kinderhook and was a member of the Empire State Youth Orchestra for four years. “The Color Purple” continues on Proctors’ Mainstage at 8pm tonight and Saturday, as well as 2pm Saturday and Sunday.

Over 81 artists are participating in the North Adams Open Studios this Friday and Saturday from 10am-6pm. Free passes to MASS MoCA are available at Open Studios locations.

LARAMIE, NOW & THEN: If you missed “The Laramie Project: Ten Years Later (An Epilogue)” at the Capital Repertory Theatre in Albany last Monday, you’ll have another opportunity when the same cast brings its staged reading to the Arts Center of the Capital Region in Troy on Monday, October 19, as part of the ongoing collaborative Firestorm Series. And castmember Ward Dales is also directing a student production of the original play, “The Laramie Project,” with the AHS Theatre Ensemble at Albany High School on Thursday-Sunday, November 19-22. 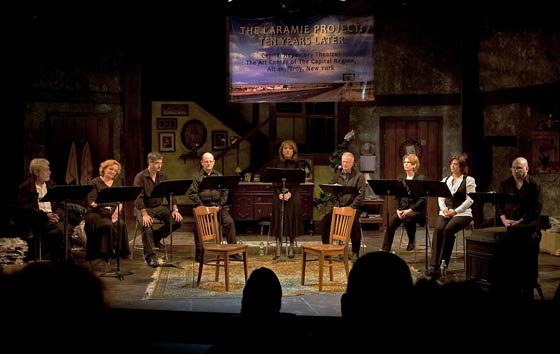 RIP LOU ALBANO: Captain Lou Albano – superstar professional wrestler and the driving force between the wrestling/rock fusion of the ’80s, especially for his work with Cyndi Lauper and NRBQ – died on Wednesday at the age of 76. Albano was inducted into the Professional Wrestling Hall of Fame in Amsterdam back in May. Superfly Jimmy Snuka presented the award, which was accepted by members of Captain Lou’s family. Meanwhile, “Lou And The Q,” Albano’s 1986 collaboration with NRBQ was remastered for CD release in Japan earlier this year.

I’M YOUR PUPPET: Rolling – and we do mean rolling – into Caffe Lena for a family matinee performance at 2pm on Sunday, October 18, the Z Puppets Rosenschnoz present “The Amazing Gnip Gnop Circus: A Glow-in-the-Dark Ping Pong Ball Spectacular.” Here’s an excerpt:

Z Puppets are also serving up performances of another one of their shows, “A La Carte: In a Fool’s Kitchen,” at Steamer 10 Theatre in Albany at 3 and 7pm Saturday, October 17.

RENAISSANCE WOMAN: In the wake of the sold-out concert at The Egg by prog-rock vets Renaissance earlier this week, you might be interested to know that vocalist Annie Haslam is also a visual artist. And unlike so many “celebrity painters,” Haslam’s art is actually affordable. You can purchase a original Haslam acrylic on canvas painting for as little as $115 on her website.

CALL FOR ENTRIES: The Lake George Arts Project presents “Peoples Pixel Project,” a video festival of original video shorts of 3-5 minutes in length. Entries are open to anyone living within 75 miles of Lake George, NY. The deadline for all entries is Friday, November 20. For list of catagories, guidelines and entry form go here. The festival and award night will take place at the Charles Wood Theater in Glens Falls on Saturday, February 6.

ENTER LAUGHING: And let’s wrap it up with this, which claims to be every single Kramer entrance into Jerry’s apartment – in chronological order:

Thanks to CJ Lais for the tip…