Sarah Pedinotti, What Was the First Album You Ever Bought? 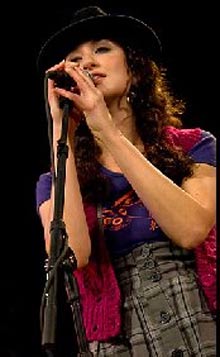 “I think it was ‘Freewheelin’.’ I think that was the first one that I went out and bought myself. My dad had it, but he’d get really upset if I took it and didn’t give it back. But ‘Freewheelin’ ‘ was one of those that I really needed to have.

I bought a few other ones with that. I was pretty young. I’m trying to think. It was some weird stuff. I think I might have even bought some Madonna. I think it was kind of Madonna’s greatest hits. And a Buddy Holly record. Yeah, I think I bought those three records.

I was very excited about it, because those were my first ones. Bob Dylan and Buddy Holly I had heard from my dad, and Madonna I probably heard from one of my sisters. So I wanted to have it.

Then, of course, I started my own collection, although it wasn’t until college that I really started to get possessive over my records.”

Sarah Pedinotti of Railbird steps out for a very special performance at the WEXT-FM benefit concert on Friday (October 23) at the Exit Dome (aka, the WMHT-TV studios) in North Greenbush.

Song of the Week: Rock and Roll Love Letter