JJ Grey Gets in a Vinyl Groove 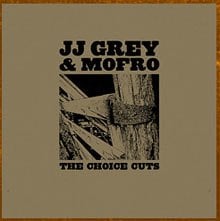 JJ Grey & Mofro are about to drop the needle on their first-ever vinyl release. Alligator Records has set a Tuesday, November 3 street date for the vinyl-only release of “The Choice Cuts,” a big 12-incher featuring two songs from each of the group’s four CDs (hand-picked by Grey), as well as a nifty, newly recorded version of Van Morrison’s classic “Tupelo Honey.” To be pressed in a limited edition of only 1,000 copies, the album marks the first vinyl release on Alligator Records since way back in 1991, when the label released Otis Rush’s “Lost In The Blues.”

JJ Grey & Mofro are teaming up with Soulive for a fabulous funked-up Friday night throwdown at Revolution Hall in Troy on October 23.