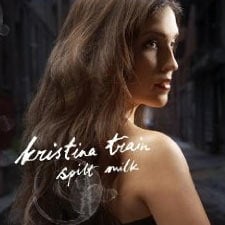 Born in NYC but raised in Savannah, Georgia, newcomer Kristina Train comes by her assured southern soul singing style quite honestly, and this – her debut album – gives her plenty of room to prove that she knows just what she’s doing.

She claims Aretha Franklin as her primary influence (what soul singer doesn’t?), but in truth she sounds much closer stylistically to Dusty Springfield and Bonnie Raitt. Or, to put it in terms that a younger generation can relate to, let’s call her a cross between Norah Jones and Duffy.

Train has her hand in writing 8 of the 11 tunes on the album, collaborating with such top-notch folks as Eg White (co-author of Adele‘s “Chasing Pavement”) and singer-songwriter Ed Harcourt.

Recorded in London with British producer Jimmy Hogarth – whose been at the helm for Duffy and Corrine Bailey Rae – the album sounds thoroughly modern, while reaching back to the golden soul era of the ’60s. The string arrangement on “It’s Over Now” is particularly old-school, for example, while the closing “Far from the Country” has a distinctly Laura Nyro vibe to it.

The major problem with the album is that there’s a certain sameness to it. Most of the songs tend to ease in with intimate, fragile vocals and then explode into big, bold, open-hearted choruses. Still, Train obviously has all the right stuff to make a big splash with this album – this is the kind of thing that the Grammy folks just love.

And while this album is damn good, Train just might have greatness in her after a bit more seasoning.

Kristina Train pulls into The Egg in Albany on Sunday, October 25, opening the show for bluesman Keb’ Mo’.