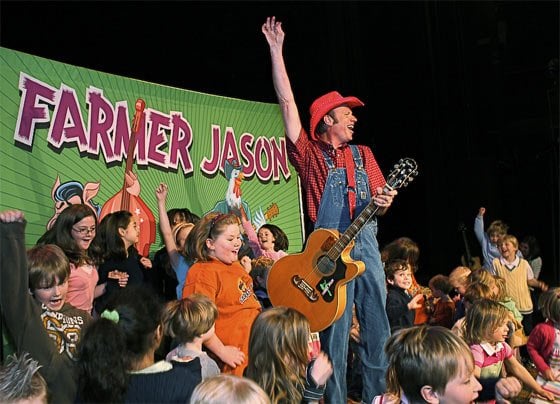 With his neon-pink straw hat atop his head and sporting faded denim overalls, Farmer Jason will be heading over to the big city of Albany for a free concert at The Linda on Friday (October 23).

You won’t have to pay a dime, but if you want to see his show, you’ll have to get up with the earlybirds, just like Farmer Jason and all the other farmers do. Showtime is 11am. Yes, that’s right, AM.

The children’s music performer will no doubt be surrounded by quite a crowd of spirited young folks as he whips through catchy, contagious kids songs like “Ode to a Toad,” “He’s a Moose on the Loose” and the already classic “Punk Rock Skunk.”

Farmer Jason already has two albums to his credit – “A Day at the Farm with Farmer Jason” and “Rockin’ in the Forest With Farmer Jason” – and now he’s racking up plenty of rave reviews for his first-ever DVD release, “It’s a… Farmer Jason,” which features clips from his Nashville Public Television program. It also features a big batch of special guests including Webb Wilder, Todd Snider (who will be performing at the Troy Savings Bank Music Hall on Saturday, October 24), Kristi Rose, Fats Kaplin and Warner Hodges (of Jason & the Scorchers).

You’ll likely find a bunch of adults in the audience at The Linda, too, digging the music just as much as the kids are. You see, Farmer Jason is actually the kid-friendly alter-ego of Jason Ringenberg, acclaimed singer-songwriter and fearless leader of the pioneering cow-punk combo Jason and the Scorchers back in the 1980s.

Meanwhile, fans who would prefer to hear Ringenberg’s high-energy, no-holds-barred, rockin’ ‘n’ rollickin’ after-dark show – or just those who can’t pull themselves out of bed in time to get to an 11am show – shouldn’t fret, either. After The Linda, Ringenberg will be rocking his way into Valentine’s Music Hall in Albany on Friday night.

But wait -there’s yet one more reason to celebrate. Jason & the Scorchers are gearing up to release a brand new album, “Halcyon Times,” in February.

Be Here Now: Against The Current