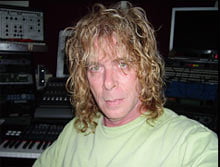 1. THE FIRST ALBUM I EVER BOUGHT WAS … I think it was Vaughn Meader’s “The First Family.” Could’ve been Cosby’s “Why Is There Air?” or “I Am The Greatest” by Cassius Clay. First musical album was a Peter, Paul and Mary thing.

2. THE FIRST CONCERT THAT I EVER SAW WAS … Peter, Paul and Mary @ the Washington Ave. Armory and got to go backstage, ’cause we had some weird relative connection to Peter Yarrow. Was too shy to say hello to Mary. Paul, however busted my balls for about 10 minutes.

3. THE FIRST MUSICAL INSTRUMENT I EVER OWNED OR PLAYED WAS … A Kay 6-string electric from John Keal’s Music. Learned about 3 chords and was told I had to get a bass to be in a band. Saved $ from my paper route and went to NYC and bought a Bill Wyman Framus bass. I still have it !!!!!

5. THE FIRST BAND I WAS EVER IN WAS … The Spiders, but it was barely a band. 2 guitars and a snare drum was all we had. First real gigging band was called The Chosen Few. We were the prodigy underlings of The Grey Things. They used to be hot shit around the area. Named for disc jockey Lee Grey, I think from WTRY or WPTR. We played mostly Blues Project, Paul Butterfield and Lovin’ Spoonful songs. Go figure.

A veteran of numerous Albany-based bands (most notably progressive rockers od), Kevin Bartlett currently resides in Woodstock where he runs a recording studio and record label (Aural Gratification), and records his own music, most recently the album “Glow in the Dark.”

14 Years Ago: The Inaugural CAMA Hall of Fame Inductees