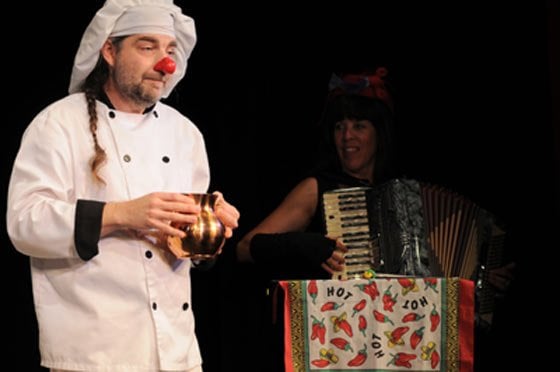 Last Saturday evening the stage at the intimate Steamer No. 10 Theatre in Albany was transformed into a French bistro complete with stove, pots and pans, accordionist, two customers drawn from the audience and a continental chef speaking “ze-English” in the manner of that lovable Warner Bros. cartoon character, Pepe La Pew.

“A La Carte: In A Fool’s Kitchen,” by the touring ensemble Z Puppets from Minnesota, offered a comedic approach to the age-old question, what do lobsters feel right before they become our dinner? Of course, this is a children’s show, so we already know that that the lobster has something planned beyond being a delicacy for dinner.

Presented flawlessly by Chris Criffith (the Chef), Shari Aronson (the lobster known as “Yum Yum”) and accordionist Gabriela Sweet, the hour-long skit featured a hilarious carrot cutting “competition” between two children coaxed from the audience to the stage by the Chef, a pair of bewildered adults sitting at the table waiting for dinner and not knowing what to do and, let us not forget, the classic pie-in-the-face by a rebellious lobster.

As the Z Puppets founders, co-directors and performers, Griffith and Aronson present a revolving repertoire of well thought-out puppet presentations, including “The Amazing Gnip Gnop Circus: A Glow in the Dark Ping Pong Ball Spectacular,” which they performed the following day at Caffe Lena in Saratoga. 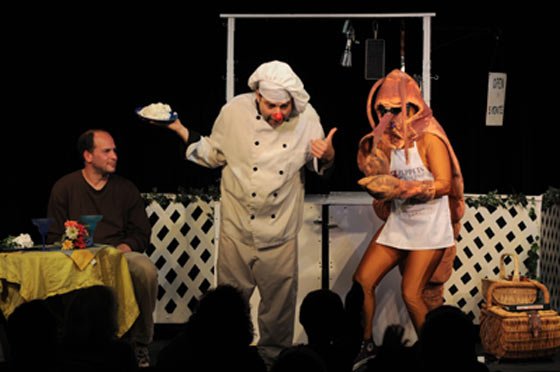