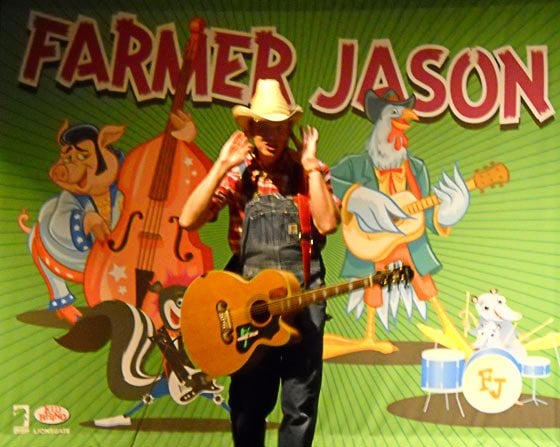 It’s your old friend, Mr. Greg from Nippertown, and I’m going to tell you all about the free concert by Farmer Jason at The Linda last Friday. You remember Friday, don’t you? It was the last day of the week before the weekend, although some people decided not to go to work or school on Friday and tried to make it part of the weekend.

Anyway, Farmer Jason sure was fun to watch, wasn’t he? A lot of the grown-ups were laughing, too, but I wasn’t sure why, but it didn’t matter ’cause I was just laughing and having fun, too.

Farmer Jason is tall, too. Hey, kids, what’s the opposite of “tall” and it rhymes with “tall,” too. That’s right, kids. Very good. “Small.”

He played the guitar really well, too, didn’t he? He kinda had to ’cause it was just him up on the stage all by himself – at least until the end of the show when he let us all come up on the stage with him and jump along to his encore song, “Little Kitty.”

We did a whole lot more than just jumping along during Farmer Jason’s show, though, didn’t we? You bet we did. We got to shout-along (“The Tractor Goes Chug Chug Chug”) and clap-along (“He’s a Hog Hog Hog”) and sing-along (“Get Up Up Up!”), too. And did you notice that Farmer Jason really likes to write songs that repeat words three times? That’s right, now count along with me – one, two, three…

And we got to dance-along, too, (“The Doggy Dance”) and even crow-along (“A Guitar Pickin’ Chicken”).

In fact, I was so tuckered out from Farmer Jason’s show that I had to go home and take a nap and I fell asleep and I missed that other show that I really wanted to see – the one by Farmer Jason’s “identical twin brother” Jason Ringenberg, who was playing at Valentine’s Music Hall that same night. It was past my bedtime, though.

Anyway, I hope Farmer Jason comes back again soon ’cause he sang one of my favorite songs, “Punk Rock Skunk,” but he didn’t sing my other favorite song, “Moose on the Loose.” You know, the one that he sings with folksinger Todd Snider? Next time, I sure hope he sings that one…

Were You There @ Discard Avant Garb?