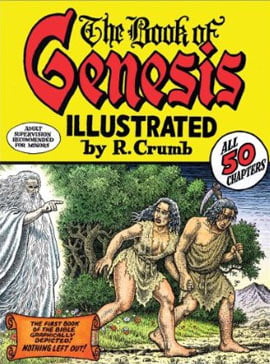 The text is original, but the illustrations – all 1200 or so – are strictly R. Crumb, as evidenced by the title, “The Book of Genesis Illustrated by R. Crumb” ($24.95, 224 pages, W.W. Norton & Co.). Before charges of blasphemy are raised, this is not Zap Comix-does-The Bible. Rather, it is a fairly straight-forward illustration job, although there are plenty of “Crumb-isms” to keep you interested.

The story? The Creation, Adam and Eve, Noah, Babel, Abraham, who begot who, Joseph’s coat, Egypt, famine … it’s all there. The illustrations are not a sly or subversive attempt at re-interpretation. They are Crumb’s representation, from his own unique and singular mental imagining of the world, of the text.

OK, God is a strict old man with a long beard and robes. What else could he be?

What are the “Crumbisms” mentioned above, you ask? Eve, and a lot of other women, get the standard R. Crumb big bodies. Nervous men have beads of sweat popping off their foreheads. The several incidents of adult intimacy between various couples, relatives and family members are Zap graphic and are the reason for the cover bearing the “Adult Supervision Recommended” warning.

If you like R. Crumb and his ilk, you will find it familiar and involving. If you don’t “get” R. Crumb, the responses will range from indifference to lighter fluid.

One value of this work is that it will get a lot of people to read the entire Book of Genesis. It is so central to Western belief and myth that it’s good to know the source. The drawings keep you interested and create context that a lot of readers will find very comfortable. The stories are so timeless and compelling that your lasting takeaway will be the text – the illustrations just helped you through it.

Many of the illustrations are very detailed which indicates this book was a major commitment by R. Crumb. His ability to create unique faces for scores of biblical characters, especially in the who begot who and other enumeration text, is downright impressive. The book concludes with an eight-page section of commentary that is enlightening. And it reminds us of the complexity and history of the Bible – people write entire books about why Abraham told King Abimelech that his wife Sarah was instead his sister.

The Book of Genesis Illustrated by R. Crumb

Al Schnier, What Was the First Album You Ever Bought?