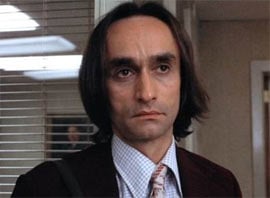 Actor John Cazale is best known for his portrayal of the frail Fredo Corleone in the “Godfather” films. During his all-too-brief acting career, Cazale appeared in a total of only five feature films – all of which received Best Picture Oscar nominations:

John Cazale died of cancer in 1978, shortly after filming “The Deer Hunter.” He was 42 years old.

Want to know more? See director Richard Shepard‘s documentary, “I Knew It Was You: Rediscovering John Cazale,” which will be screened at 8pm on Thursday (October 29) at Images Cinema in Williamstown, Mass., as part of the 11th annual Williamstown Film Festival.

Take It From the Top: Shawn Colvin