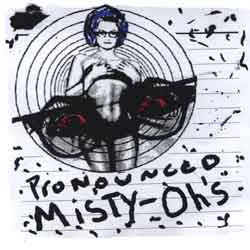 Having emerged from the fold of Blackcat Elliot, guitarist-vocalist Johnny Mystery goes after the heart of ’60s garage rock.

And it’s as simple as can be, as you can probably guess from the Xeroxed, hand-colored CD covers and the hand-stamped discs.

The too-short, six-song CD concludes with a rave-up on the 13th Floor Elevators’ classic “You’re Gonna Miss Me,” which is the perfect signpost if you wanna know where Johnny Mystery and the Mysteios are coming from. This is straight-up, bash-em-out, three-chord rock territory.

“I got a stomp-box underneath my feet, she’s a great big girl who likes to eat electrons and protons and anything else she might meet. So burn the sky, scorch the air. Ultrasonic feedback penatrator. Beware the goons, they’re full of doom, and they’re everywhere. We’re all mysteios,” Mystery wails on the band’s frantic, frazzled theme song.

“The Camel Walk” could have come crawling out of the songbag of Sam the Sham & the Pharoahs – or the New York Dolls. On other songs like ” “Pretty People Suicide” and “Smash the Sun,” Mystery taps into the desperate, crackling energy of the Count Five, Jim Carroll, Iggy Pop and an endless parade of other American primitive musicians who never managed to make it out of their garages.

Prodcued by Nicki Skiper and recorded at Bitch Kitty Studios in Bennington, VT, the half-dozen sonic nuggets on “Pronounced Misty-oh’s” clock in at under 17 minutes, which just leaves me wondering, “What else have these guys got? And how long will it take before I get a chance to hear it?”

Johnny Mystery & the Mysteios will be performing at the River Street Beat Shop in Troy on Friday (October 30) in conjunction with the Troy Night Out arts walk. In addition, they will be playing at Positively Fourth Street in Troy on Saturday (October 31).