Mike Huckabee Gets Down! 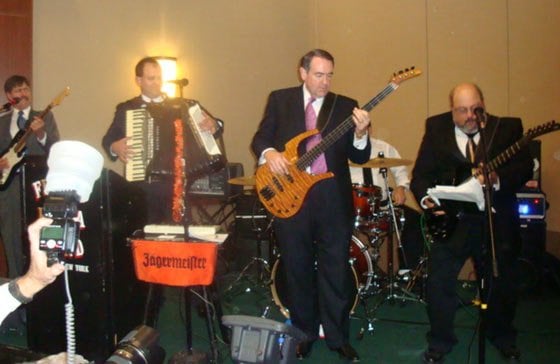 Former Arkansas governor and presidential contender Mike Huckabee strapped on a bass and rocked out with Verona’s own Fritz’s Polka Band at a Conservative Party Recognition Dinner in Liverpool, NY, on Tuesday evening.

“The guys in Fritz’s Polka Band were excited to not only jam with a former 2008 presidential contender, but also delighted that he used my bass player’s (Gabe Vaccaro) bass guitar,” said accordionist Fritz Scherz, FPB’s bandleader. “He was very gracious to us, and before we played, he even thanked me for letting him perform with my band! Talk about a classy guy!”

Fritz’s Polka Band has been performing for over 31 years and made history in 1999, when they became the first polka band to perform at a Woodstock Festival in Rome, NY. The band has 17 recordings to its credit.

So what song did FPB and Huckabee crank out during their jam session?

Fritz adds that the performance earned a rousing standing ovation.