The fine folks from Art for Animals have organized the art exhibition “The Dog Show: When the Model Barks,” which opens at the Spencertown Academy Arts Center on Sunday (November 1). The exhibit features artwork from more than three dozen established artists, including Sylvia Placey, Laurie Anderson, Richard Serra, Kiki Smith and, of course, William Wegman.

Other works on display at the exhibit were created earlier this year by middle school students from Taconic Hills Central Schools. The models and subjects of their paintings were a quartet of registered therapy dogs: an American pit bull terrier, a basset hound, a French bulldog and a Weimaraner.

The student works will be sold via silent auction during the opening reception for the exhibit from 3-5pm on Sunday (November 1). And yes, the models will be present at the reception, so you might want to bring along a pocketful of dog treats. 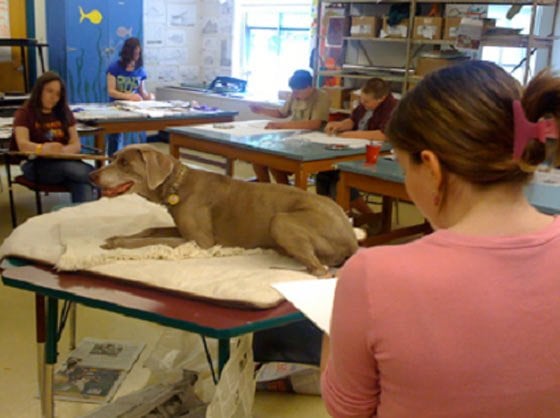 Albany Comic Con 4 takes over the Wolf Road Holiday Inn in Colonie from 10am-4pm on Sunday (November 1), stretching out the Halloween holiday for at least one extra day. Of course, the convention will feature lots of dealers of comic books, toys, non-sports cards and various other collectibles, but it will also feature panel discussions, a costume contest and a Magic the Gathering tournament. Among the many comics artists and writer who will be on hand are Paul Abram, Bill Anderson, Dennis Calero, Fred Hembeck, Todd Dezago, Ramona Fradon and John Hebert. 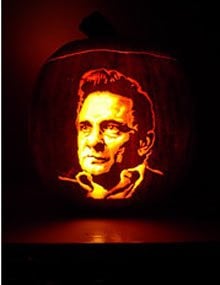 Need some inspiration before you begin carving away at that big orange orb that’s staring at you from your kitchen table? Here are a few Jack-O-Lantern Hall of Fame-worthy efforts by Schenectady’s great Picasso of Pumpkins, Walt Mahoski.

Former Nippertown resident Richard Lainhart is performing live with his Buchla 200e/Haken Continuum system at electro-music 2009. The bad news it’s all taking place in Bloomingdale, New Jersey. The good news is that you can tune into the live electro-music radio stream here.

Award-winning poet George Drew will settle in at Caffe Lena in Saratoga Springs at 3pm on Sunday for a reading in celebration of his new book of poetry, “American Cool,” published by Tamarack Editions. The Mississippi-born Drew will be joined by two other Capital Region poets, Nancy White and Barbara Louise Ungar.

Here’s a sample from “American Cool”:

I HAVE SPENT THE AFTERNOON WITH ELVIS

I have spent the afternoon with Elvis,
me sitting in a canvas chair on the porch
of a cabin, him shaking his hips so hard
leaves on the red oak flutter like scarves.

Growing tired of him and his unruly hips
I stroll up the road, but it’s not easy
to escape the Elvis that Elvis has become.
A car goes by, a blur of engine and guitar.

Silence returns and it’s nearly unbearable.
It’s the horrible dead air between a last
note with all the fizz of a flat Coke
and Sam Philips’ showy explosive groan.

The elders lied. Silence is not art deco,
not Beale Street on a sizzling Memphis night.
Silence is monotone, it’s a song unsung.
Silence is an audience that never comes.

Matthew O’Neill and Friends / Dominic and the Family Band