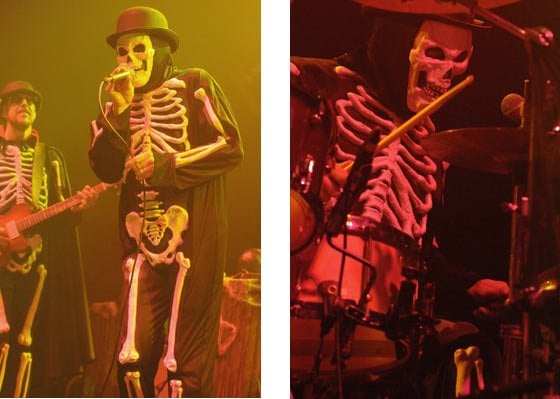 The rain on Halloween night didn’t stop the thousands who flowed into the Washington Avenue Armory in Albany to see jam-band favorites moe. Many wore costumes, and many more had traveled far to be there – Ken from Maine, the couple from New Jersey, the guy who flew in from California and the two girls who drove up from Brooklyn. They all were excited, they are all fans, and they all were anticipating a great show.

moe. has an incredible front line with two brilliant guitarists, Chuck Garvey and Al Schnier, both of whom were featured in “Guitar World” and “Modern Guitar.” Rolling Stone magazine recently placed the two of them in the ranks of the top twenty new “guitar gods.”

Percussionist-vibist Jim Loughlin and drummer Vinnie Amico were both written about in feature articles in “Drum!” magazine, while bass player Rob Derhak was covered extensively last year by “State Of Mind” magazine.

The band recently celebrated three decades of touring the world and releasing both live and studio albums. Of their two 2008 releases, “Sticks and Stones” captures their evolution while “Warts and All, Volume 5” captures their performances live in concert.

While waiting for the band to start, Ken from Maine – who counted the Albany show as his 59th moe. show – explained, “In the jam-band kingdom moe. concerts on Halloween and New Year’s Eve are like religious experiences. They’re the most important to both the band and the fans because the Halloween concert catches them after a summer tour where they are tight with their new material, while the New Year’s Eve show is where they present some of their new music for the coming year.”

He added, “This show was fan-driven where the band asked their fans to send them their favorites songs, and the most popular 26 or 30 tunes that people sent in would be played tonight.”

Amidst thundering audience applause, whistles and shouts the five band members of moe. mounted the stage with an explosion of lights and music and launch their two-hour plus set of rock, funk, rap and all types of progressive music.

Playing a mix of covers and originals fingers flew across guitar fretboards, three-part harmony vocals soared and a dense wall of percussive beats shot out into the Armory over the heads of fans dancing, bopping and cheering the night away.

There were, of course, plenty of off-the-wall covers – as you can see from the set list below – and that’s always half the fun on Halloween. Making their way back to their one-time hometown, moe. served up plenty of treats, and a few tricks, too, for the holiday. 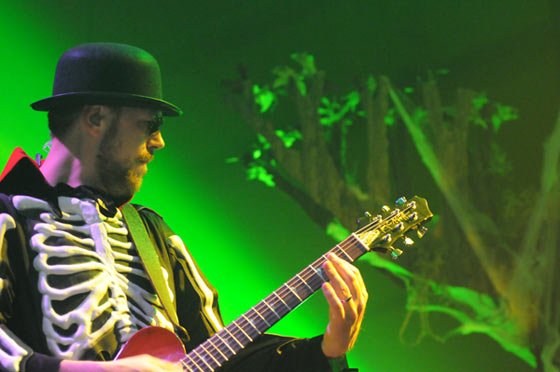 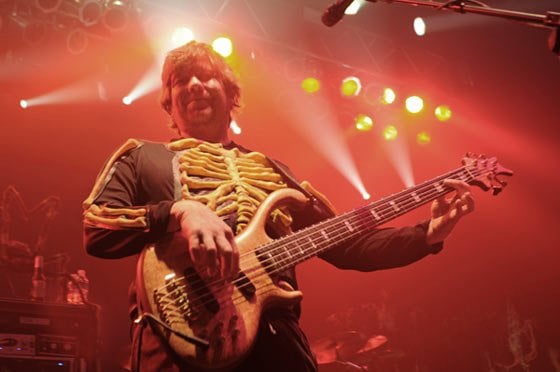 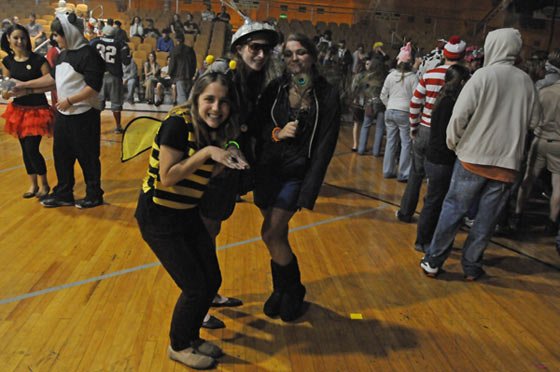