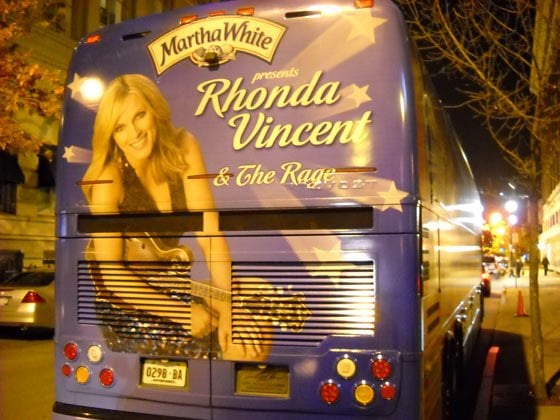 This was one professional show business show.

Rhonda Vincent is a great singer, charming, totally at ease, professional, wore a dress/gown that could survive the pundits on the Oscar red carpet (and still worked in a bluegrass band), played a spirited mandolin and, just to rub it in, is very attractive with a passing resemblance to Jane Krakowski on “30 Rock.”

Her band, in non-competing black suits, were expert banjo/fiddle/guitar/bass players who knew all their notes and could sing pretty darn good too.

So off they go – playing acoustic. Rhonda belts one out, the band picks like crazy, singing harmony, working the four mikes like clockwork. Couple more songs. Then slow it down. Then let the guys sing one. Some gospel songs. And on it goes.

Rhonda was a successful country singer before she laterally settled back into bluegrass, so there was a definite country slant to the material that is not evident in more hardcore bluegrass bands. In fact, they are a band that could really please the audience in a casino, state fair grandstand or country music arena show. Rhonda knows what needs to be done; the average bluegrass band – not so much.

We all expect bands to push their CDs, especially bluegrass bands who come from the tradition of selling albums from a card table next to the stage. Rhonda did about 10 minutes of commercials for Martha White Flour (their sponsor) and a bluegrass cruise that her band and others are participating in. She even threw T-shirts out to the crowd (too expensive to bring a mascot to do that?). But she is so personable, we don’t care!

Intermission. More songs and picking with some country music overtones. Rhonda bright as ever. The boys picking away, fast and furious on this one, tastefully laid back on that one, harmony singing on the a cappella gospel songs and then goodnight.

Encore was “Orange Blossom Special,” the “Freebird” of bluegrass, which is a showbiz way of screwing the lid down and making your getaway – they were driving to Virginia that night for a noon-time show the next day.

Rhonda, while not in direct lineage from Ralph and Bill, is keeping the music alive and she is one great singer – country, bluegrass, gospel or whatever – and riding in a bus all night to her next show to boot. Yes, she has the spirit. You go, girl!