Bid on a Baby Taylor signed by … WOW! 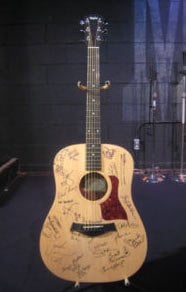 Michael Eck just sent this along – I would have posted it earlier but I just spent the past 1/2 hour listening to different versions of A Million Miles Away, one of the greatest songs of all time, on Youtube.

On January 15 of this year, the great American songwriter Peter Case underwent emergency open-heart surgery. The operation was successful and Case is well on the mend, but the medical bills – as they are for so many uninsured musicians – are staggering.

That evening a Taylor Big Baby guitar was brought out of its case and signed by all of the performers. That instrument is now being auctioned on eBay as an additional fundraiser for Peter. It’s a chance to own a piece of history while also honoring the man behind such closet classics as “A Walk in The Woods,” “Old Part of Town,” “Cold Trail Blues” and The Plimsouls’ “A Million Miles Away.”

Case’s songs have also been covered by a litany of performers like Alejandro Escovedo, James McMurtry, Chris Smither, John Prine, Joe Ely, Richard Buckner and Chuck Prophet, all – tellingly – know for being pretty serious songwriters themselves.

Click here to bid (or maybe just gaze in wonderment). Bidding ends Nov. 12 at 5:30 p.m. PST. Donations can also be made through www.hiddenlovemedicalrelief.com.