Marshall Crenshaw, What Was the First Album You Ever Bought? 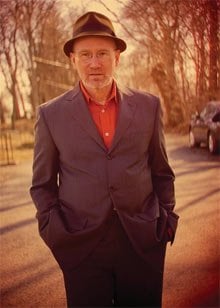 “I can’t remember the first album that I bought with my own money, but I remember buying some singles in the ’60s. I remember going to the store to buy a little bunch of 45s, and one of them was ‘The Great Airplane Strike’ by Paul Revere & the Raiders. ‘Good Vibrations’ by the Beach Boys was another one of them, but I don’t remember the rest.

I also remember hearing a song on the radio called ‘Tin Soldier’ by the Small Faces. And as soon as that song was over, I got up and walked out the door and went and bought that record.

Those were some of the first records that I ever bought. Now I have about 5,000 records, but I don’t have any of those first ones that I bought, which is odd. Don’t know what happened to them.

One album that I bought when I was in high school that I still play all the time is ‘Bo Diddley’s 16 All-Time Greatest Hits.’ I kinda like that record more and more as time goes on.”

In support of his new album, “Jaggedland” on the 429 Records label, Marshall Crenshaw will be at the Van Dyck in Schenectady for two solo shows (7 & 9:30pm) on Saturday (November 7).