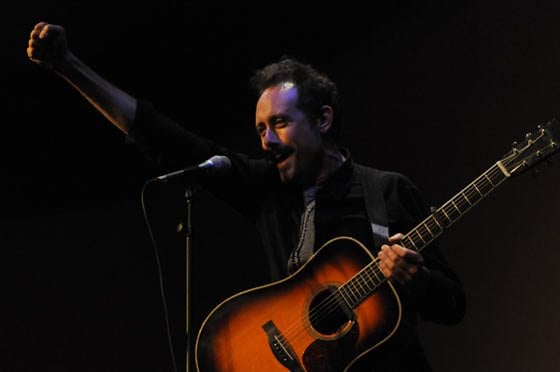 Richard Julian’s second visit to The Linda last Friday may not have attracted the biggest audience, but they were surely his devoted fans, especially when he asked them for requests. Standing in the middle of the stage holding his acoustic guitar, he grinned at the onslaught of titles being thrown at him. Launching into “Please Rene, Not Now,” his tenor voice passionately wove in and out of the guitar notes, bringing “Rene” – and the song – to life.

But he is also a guitar-toting, singing performer in his own right with a bunch of national tours under his belt and four critically acclaimed releases to his credit. His followup to last year’s tour-de-force “Sunday Morning In Saturday’s Shoes” is still in the can with the working title, “Girl Needs Attention.”

At The Linda, Julian performed a mix of dynamic covers and originals including the Rolling Stones’ “Tumblin’ Dice,” as well as an unreleased, comical, tongue-in-cheek portrait of a wacky girlfriend, “Georgie.” He later invited trumpeter Lou Apicello from the opening act We Are Jeneric to join him on stage to blow jazz be-bop lines on a beat-poetry offering reminiscent of the late 1950’s collaboration between writer-poet Jack Kerouac and saxophonist Bud Shank. Rounding out the evening’s terrific show, Julian concluded with a Frankie Lane tune that captured the sentiments of all hearing it, “We’ll Be Together Again.” Tonight: The Return of Eclectic Method!