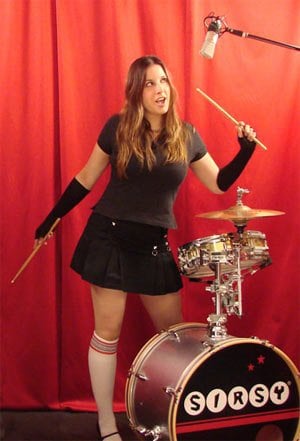 1. THE FIRST ALBUM I EVER BOUGHT WAS … Well, I used to think I was going to marry Elvis when I was 4. (I didn’t know he was dead because, well, he was on tv). And, the Beatles are my all-time favorite band. However, my parents owned pretty much everything that Elvis or the Beatles ever released. So, I don’t know if I officially bought any of these for myself. Once I started earning an allowance and being able to buy my own stuff – hmm … I think it was Michael Jackson’s “Thriller.”

2. THE FIRST CONCERT THAT I EVER SAW WAS … Van Halen/Alice in Chains

3. THE FIRST MUSICAL INSTRUMENT I EVER OWNED OR PLAYED WAS … piano

4. THE FIRST SONG THAT I EVER PERFORMED IN PUBLIC WAS … Something from the musical version of “Alice in Wonderland.” I was Alice in my fourth grade play.

5. THE FIRST BAND I WAS EVER IN WAS … My dad’s band. I can’t remember what they were called at the time (they changed their name a lot). I couldn’t perform at some of the shows because I wasn’t old enough to get into the club.

Melanie Krahmer and her Sirsy bandmate Rich Libutti will be opening for Train at Northern Lights in Clifton Park on Wednesday (November 11), and they’ll be headlining at Savannah’s in Albany on Saturday (November 14).