Joe Perry, What Was the First Album You Ever Bought? 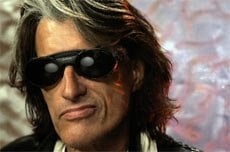 “I think it was probably ‘Having a Rave Up With the Yardbirds,’ ’cause I was definitely into them at a pretty young age.

But it’s hard for me to remember. It was either that or one of the Beatles albums. And then Chuck Berry. Those were the albums that really got me inspired to play guitar – to play guitar and rock out.

When I was 14 years old and I saw ‘A Hard Day’s Night,’ I thought it would be great to be in a band. And, oh yeah, I thought I should play guitar, too. A big part of that was the comradery, the concept of being in a gang and that whole thing.

But the Beatles’ music was just so incredible that it was beyond what I thought I could play. They were just so untouchable. I didn’t feel like I could say, ‘I’m gonna be like the Beatles,’ because I don’t know about that.

In support of his new album, “Have Guitar, Will Travel,” Aerosmith guitarslinger and Rock and Roll Hall of Famer Joe Perry comes to Nippertown on Sunday evening to play a show at Northern Lights in Clifton Park with his “other” band, the Joe Perry Project.