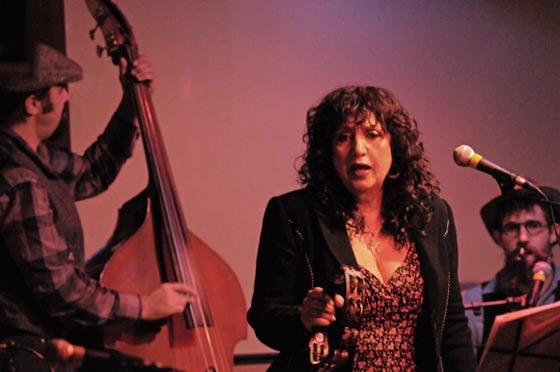 From the start, these guys blew the hat right off of my head. And I mean that in the very best way possible.

Opening with W.C. Handy’s nugget “Memphis Blues,” they were ragged, but oh-so-right. Kit Stovepipe on lead vocals and resonator guitar. Devin Champlin on tenor banjo. And the mighty mighty Lucas Hicks on all things percussive.

Hicks was sitting down, playing a “drum kit” fashioned out of an old suitcase, an assortment of bells and an array of tin cans of varying sizes. He played bones in his left hand and spoons in his right hand. He was monster.

For Howard Armstrong’s “State Street Rag,” bassist Kurt Jensen joined the band, and by the time they romped through Jabbo Smith’s “Lina Blues,” washboard, harmonica, ukulele and kazoo had been added to the musical mix.

So when Maria Muldaur joined the band on stage, they had already built up quite a head of steam, and she had a difficult time keeping up during her opening volley of the classic “I’m a Woman” and Dan Hicks’ “The Diplomat.” And banging away on not one but two tambourines in the intimate Van Dyck, Muldaur muddied the rhythms a bit.

Fortunately, she hit the groove with “Shake Hands and Tell Me Goodbye,” a sweet kiss-off blues from the Mississippi Shieks, and she held her ground for the rest of the hour.

They included most of the tunes from Muldaur’s new album, “Maria Muldaur & Her Graden of Joy,” although not the title track. The top-hatted Stovepipe is the only member of her road band who appears on the album, which also features her old Even Dozen Jug Band-mates John Sebastian and David Grisman, as well as Taj Mahal, Dan Hicks and the late great jugmaster Fritz Richmond. It’s a fine album.

Go hear to read my review of the show in the Times Union.

And if you want to hear some truly funky, old-timey jug band music, get hold of the Gallus Brothers‘ “Hello Neighbor!” (featuring Champlin and Hicks) and the Crow Quilt Night Owls‘ “Mechanical Unicorn” (led by Stovepipe).