“It’s no small feat to create a record that will hold the attention of someone who is not used to listening to records,” writes Arlo Guthrie in the introduction to “Go Waggaloo.” “If you do it right, it’s a treasure.” 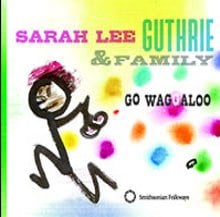 And with this, her first children’s album, Arlo’s daughter got it right. The 13-track “Go Waggaloo” features Sarah Lee Guthrie, her husband Johnny Irion, their two daughters, and a host of other family and friends, including her father Arlo Guthrie, Pete Seeger and Pete’s grandson Tao Rodriguez Seeger. The album also includes original drawings by Woody Guthrie on the CD cover and booklet.

There are a couple of traditional tunes (including “She’ll Be Comin’ ‘Round the Mountain”), but the bulk of the bakers’ dozen selections are original tunes by Guthrie and her family. Of special note are three songs featuring lyrics by her grandfather Woody Guthrie that had never been set to music before – “Bright Clear Day,” “Fox and the Goose” and the album’s title track.

“Go Waggaloo” is Sarah Lee Guthrie’s first recording for the Smithsonian Folkways label, which is home to 42 albums featuring Woody Guthrie and more than 200 children’s recordings from the likes of Pete Seeger, Ella Jenkins, Lead Belly and many others.

Part of the album’s charm is the fusion of traditional folk music styles with some decidedly more contemporary lyrics and instrumentation. You’ll hear a drum machine, songs about Xboxes and DVDs and even a spur of the moment song that was recorded on a cell phone in the midst of a Guthrie family road trip.

“If you have enough kid left inside yourself somewhere for these songs to make sense, consider yourself lucky,” writes Arlo Guthrie in the introduction. “They are building blocks of who you are and where you come from. I love songs that are inspired and/or written by kids themselves and not by the people who think they know what’s good for you.”

“Go Waggaloo,” is likely to not only entertain the kids, but every member of the family as well.

Sarah Lee Guthrie will join her husband Johnny Irion, her dad Arlo Guthrie and an assortment of Guthrie childrem grandchildren, cousins and in-laws as “The Guthrie Family Rides Again” rides into The Egg in Albany on Friday (November 13).