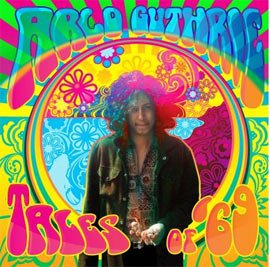 “Okay, so 40 years ago, August we were at Woodstock,” Arlo Guthrie recalls on his website. “Then that September, Jackie and I bought the farm (as it were), and we’re still here. Later, that October we got married on the farm, still married, too. Then later in November, ‘Alice’s Restaurant’ (the movie) was released! There hasn’t been a four month stretch like that since then! So we’re celebrating a lot of 40th things this year.”

One more 40th that Arlo served up this year is “Tales of ’69,” a new album of an old performance. Long lost and long forgotten, the show was recorded live somewhere on Long Island – Arlo isn’t quite sure where, and that’s understandable… after all, it was the ’60s, dudes and dudesses – shortly before the gathering of the ’69 Woodstock festival. And “Tales of ’69” is a must-have musical time capsule for all Guthrie fans.

He’s accompanied by bassist Bob Atkins, and the disc features Guthrie wending his way through nine tracks, including an epic 30-minute, shaggy dog talking blues that starts out as tale about marijuana farming in Biblical times set to the music of “Old McDonald Had a Farm.”

But somewhere around the six-minute mark, it shifts gears into “Alice’s Restaurant Massacree.”

Not the version of “Alice’s” that you’re probably familiar with, mine you, but rather one about a Russian scientist named Max, the discovery of a finger-lickin’-good, multi-colored rainbow roach (that’s “roach,” like he’s talking about an insect, right?) and Lyndon Johnson. Anyway, here Arlo titles it “Alice -Before Time Began,” and it’s chockful of doper tales, Cold War references and some pretty fine – and very familiar – ragtime guitar pickin’.

It also concludes with Guthrie’s vintage words of wisdom – “Being stoned in a straight world is a lot easier than being straight in a stoned one.”

The disc also features an eight-and-a-half-minute rendition of “The Motorcycle Song” (here titled “The Unbelievable Motorcycle Tale”) and a rousing rendition of “Coming Into Los Angeles,” as well as several songs that Arlo hadn’t previously recorded.

Arlo Guthrie heads up the “Guthrie Family Rides Again Tour” that rolls into The Egg in Albany tonight (Friday, November 14). Joining him will be his daughter Sarah Lee Guthrie and her family, as well as various other children, grandchildren, aunts, cousins, uncles, nephews and whoever.