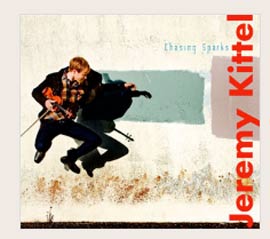 Originally classically trained, Kittel has studied Irish, jazz, folk and traditional music – winning quite a host of varied awards along the way. He’s won multiple US National Scottish Fiddle Championships, six Detroit Music Awards (for Outstanding Folk Artist, Jazz Recording and Jazz Composer), a Masters of Jazz Violin from Manhattan School of Music and a Stanley Medal from the University of Michigan School of Music to name just a few.

Just 25 years old, he has performed over 1,000 concerts as soloist or guest, and is now part of the Grammy Award-winning chamber-jazz ensemble, the Turtle Island String Quartet.

On this album, he’s joined by such like-minded acoustic music adventurers as bassist Edgar Meyer (in town last month with Bela Fleck at The Egg), as well as mandolinists Chris Thile (also at The Egg last month with his band, the Punch Brothers) and Mike Marshall (who will be joining Turtle Island in concert at The Egg in April).

There are 11 songs here, and each one tends to start off sounding like a traditional Celtic reel or jig. And that’s exactly what some of them are. But whether traditional or not, Kittel takes each tune down the road less traveled, breaking off in thrilling improvisations that sound more akin to the world of jazz or unplugged progressive rock.

“I wrote most of these tunes with no intention of combining styles,” says Kittel. “Rather, they were just embellishments of melodies and sounds that were floating around in my head.

“One of the toughest challenges for me is to learn to trust my instincts, my own judgment. But sometimes I don’t even hear those instincts; I’m not paying attention. I find that this is important when composing anything – you have to listen to your inner voice, or you will miss it.”

If you saw Kittel lead his World Band at the Old Songs Festival of Traditional Music and Dance in 2006, then you probably already know how exciting this music is.

The Jeremy Kittel World Band will perform at the Old Songs Hall in Voorheesville on Saturday (November 21).