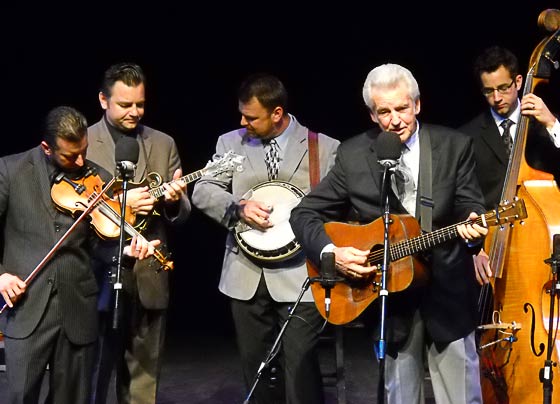 He’s 70 years old.
He’s been playing bluegrass music for a half century.
And Del McCoury‘s still got it.

And he still seems to love what he’s doing – hitting the road with his sons (mandolinist Ronnie and banjoist Robbie) and the rest of his band, singing straight-from-the-holler bluegrass.

On Sunday night at The Egg, he didn’t quite hit all of the notes. He had a bit of trouble with the high parts on Slim Whitman’s old hit, “I Remember You,” but he was back as strong as ever on his classic “Rain and Snow,” and his falsetto was in fine, fine form on the stunning Bill Monroe gospel quartet number, “Get Down on Your Knees and Pray.”

Of course, Monroe is the wellspring of bluegrass, and McCoury paid him his due throughout the night. The band raved up on “Rawhide,” and the new-kid-in-the-band, bassist Alan Bartram came mighty close to stealing the show with a pair of Monroe nuggets, “Kentucky Waltz” and “Rocky Road Blues.”

But they also paid tribute to Jimmy Martin (“She’s Left Me Again”), Roger Miller (“Half a Mind” sung by fiddler Jason Carter), the Lovin’ Spoonful (“Nashville Cats”) and Buddy & Julie Miller (“Does My Ring Burn Your Finger?”).

And, of course, they couldn’t get away without playing Richard Thompson’s “1952 Vincent Black Lightning,” which has become something of a signature song for McCoury. On Sunday, he referred to the song simply as “the Vincent.” His rendition is no match for Thompson’s (heard live at The Egg just a month ago), but it still shimmers and shines in all the right places.

McCoury not only showcased his new album, “Family Circle,” but also devoted plenty of the nearly two-hour show to audience requests. And there were lots of ’em shouted out from the near-capacity, cross-generational crowd.

They were certainly not slouches in the vocal department, with Hall, bassist Travis Book and fiddler Jeremy Garrett each handling lead vocal chores throughout the set, but their musicianship was truly mesmerizing.

Read my review of the show in the Times Union.

Dry My Tears and Move On
She’s Left Me Again
Quicksburg Rondezvous
A Deeper Shade of Blue
? (banjo instrumental)
Nashville Cats
? (fiddle instrumental)
Kentucky Waltz
1952 Vincent Black Lightning
Snake in the House
Moneyland
40 Acres and a Fool
Hello Lonely
I Remember You
Rain and Snow
Goldbrickin’
Count Me Out
Half a Mind
Rawhide
Rocky Road Blues
I’m Justified
Get Down on Your Knees and Pray
Gone But Not Forgotten
ENCORES
Does My Ring Burn Your Finger?
My Love Will Not Change