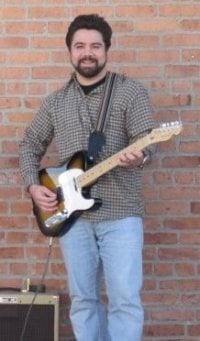 1. THE FIRST ALBUM I EVER BOUGHT WAS … I believe the first album I bought with my own (allowance) money was probably something cheesy, like Huey Lewis & the News’ “Sports.” I was a Top 40 kid until the hormones started kicking in around age 11 and I discovered Zeppelin “IV.”

2. THE FIRST CONCERT I EVER SAW WAS … The Firm at Nassau Coliseum.

3. THE FIRST MUSICAL INSTRUMENT I EVER OWNED OR PLAYED WAS … My first guitar was a very cheap Fender acoustic. It has since been retired, but that beat-up instrument is actually what I play on the Mitch Elrod & Countrysoulhouse album, “Roadhouse Nature.”

4. THE FIRST SONG I EVER PERFORMED IN PUBLIC WAS … Cliché of cliches, the first song I ever played in public was “Stairway to Heaven” at a talent night at a resort in the Catskills. I played ‘rhythm’, and my older brother Eric played ‘lead.’ This was around 12 years old. Then it was strictly things like “Hideaway,” “Stormy Monday” and “Johnny B. Goode” for the next couple of years – things that wouldn’t scare the old folks that were my only audience at the time.

5. THE FIRST BAND I WAS EVER IN WAS … The first band where I actually got paid a little bit was called Stand up Crooked – future knotworking mastermind Ed Gorch on vocals. He was still just learning guitar at the time; I actually was the first person to show him how to change guitar strings. Just ask him! We were about 17 & 18, playing Irish bars in East Durham. Once, the place cleared out because a fight broke out, and all our underage friends were there, drinking Zima and Budweisers. When the police arrived, we were still playing. Mostly classic rock and hits of the day – “And it Stoned Me,” “Hey Hey What Can I Do,” “Hunger Strike,” “Plush”(!) – and at least one song that morphed into a Reservoir Square song (Ed’s college band down in Poughkeepsie).

Mike Hotter and his knotworking bandmates make an all-too-rare public appearance at Tess’ Lark Tavern in Albany on Saturday (November 28), sharing the stage with Ike Snopes.