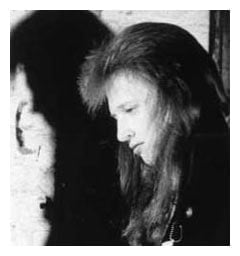 Thanksgiving is a time when we pause and count our blessings among family and friends. Sadly, Thanksgiving is also the anniversary of the death of Billy Harrigan, the charismatic singer for Schenectady punk gods The Dronez.

Here’s an excerpt from what Greg said in his Times Union remembrance, eight years ago:

Harrigan was a true visionary. He knew that image was important in the world of rock ‘n’ roll, and he was the Capital Region’s King of Shock Rock. In his day, Harrigan out-Marilyn-Mansoned Marilyn Manson and out-Reznored Trent Reznor…The Dronez live shows are still the stuff of legend — both in the band’s original early-’80s incarnation and in their later ’92-’93 reunion shows. But more importantly, the Dronez always had the music and talent to back up their outrageous attitude.

And here’s a bit of what I wrote about my work with him in The New Shiny Things, two recordings from 1981 that were re-released a few years ago on Germany’s Anna Logue Records:

Although he was a local legend more for his stage antics, Billy was, hands down, the most talented vocalist and songwriter I’ve ever worked with. During improvisational jam sessions, he would open his mouth and lyrics would pour out, fully formed. This year, I listened to about 40 hours of Billy’s rehearsal tapes trying to find a third song for our Anna Logue Records reissue. What struck me most was Billy’s voice – his pitch, his range, his brilliant phrasing; even during marathon, beer-soaked rehearsals he never faltered.

I used to have a rather worn cassette tape of unreleased Dronez demos that I would use as an antidote to too much family time (I really do love my family, but three hours of biting my tongue and smiling sweetly can be a little….trying.) I vividly remember blasting those songs on the way home from more than one Thanksgiving dinner. 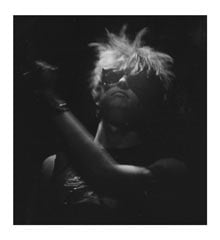 So for you, today, an ample shot of punky metal to follow your Thanksgiving feast: We Are The Dronez.mp3 (snarf it up while you can, it won’t be here long.)

Come on, sing it with me:

We miss you, Billy.