As a public service to you many Nippertown.com readers who are still searching for the perfect gifts for your loved ones, we’ll be spotlighting at least one gift suggestion daily this month. Most will be homegrown and/or handmade, but sometimes we’ll just point out something delightfully absurd.

Ah, yes, the box set is really getting out of control. 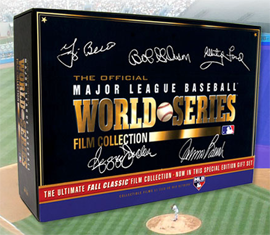 But the true blue die-hard baseball fan might want to opt for the limited edition “Signature Line” version of the set – the one that features the Major League Baseball-authenticated autographs of a dozen Hall of Famers and World Series heroes.

The “Signature Line” box set is being offered in a limited edition run of only 100, and it’s available exclusively at Shop.history.com and Shop.MLB.com.

Danny Kalb, What Was the First Album You Ever Bought?