CD: The Boston Celtics’ “The End of Mont Pleasant” 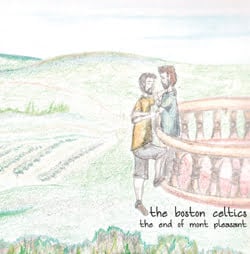 The Boston Celtics‘ full-length debut collection of entrancing lo-fi experimental pop comes from the duo of Ryan Stewart and Richard Nolan, Jr. of Beware! The Other Head of Science.

The opening “Mont Pleasant” – melancholy and moody – sounds like some forgotten Christmas carol-meets-the “Star Wars” theme, at least until the song slides right off the track, rhythmically speaking, on the coda.

On tracks like “Send It Out (That Way)” and “God Hands,” it sometimes sounds as if the vocals were recorded not only a room away from everything else, but in an altogether different zip code. Interestingly enough, that only seems to add another layer of depth and mystery to the intoxicating, drifting music.

Even when they venture off into the Land of Auto-Tune on “Alma Mater,” the duo manages to deftly balance left-of-center sonics with catchy pop. Nobody’s ever going to mistake this for T-Pain.

And, yes, despite all of the sonic experimentation that these guys are tossing into the mix, there’s an undeniable underlying pop current that runs through these tunes – honest, accessible melodies, as well as plenty of sharp, inviting riffs and hooks.

The album’s pair of instrumental offings – “Bond of the Alderman” and “On That Side of the Pinery” – are especially atmospheric, at times ambient, the space between the notes seemingly at least as important as the notes themselves.

The album is a dream/nightmare tightrope walk, both charming and disarming, like some late-night conversation between Angelo Badalamenti and R. Stevie Moore.

The low-budget choral climax on the closing “Stimpacks” neatly sums up the album sonically, and the lyrics are even more to the point: “America, we dug a hole. We got to fill that hole with lots of soul.”

The Boston Celtics celebrate the release of “The End of Mont Pleasant” at Valentine’s Music Hall in Albany on Friday (December 4). Sharing the stage will be two other B3nson labelmates who are simultaneously releasing new discs, Littlefoot and the Hoborchestra.

And The Universe Coils In On Itself A Little More Tightly