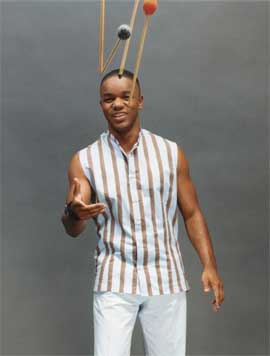 Albany native Stefon Harris received a wonderful holiday homecoming gift last night, when it was revealed that the jazz vibraphone phenom had garnered a Grammy nomination in the Best Contemporary Jazz Album category for his album, “Urbanus.” Recorded with his group Blackout and produced by Harris, the album is the 36-year-old vibesman’s first for the Concord Jazz label.

Harris faces some stiff competition for the award, however, as Julian Lage’s “Sounding Point,” Philippe Saisse’s “At World’s Edge,” Mike Stern’s “Big Neighborhood” and the late Joe Zawinul & the Zawinul Syndicate’s “75,” are the other nominees in the category.

Harris and his band Blackout are in town to perform on the “Melodies of Christmas” program at Proctors in Schenectady. The concert opens at 7pm tonight (Thursday, December 3) and continues at 7pm Friday and Saturday, before concluding with a matinee at 3pm Sunday. The concert is being filmed and will be broadcast on WRGB-TV (Ch. 6) during the holidays.

Also performing on the 30th anniversary edition of “Melodies of Christmas” will be the Empire State Orchestra & Youth Choral, the McKrells with Sara Milonovich, the duo of Randy Crafton & Amy Platt and the Orlando School of Dance.

But Harris isn’t the only musician with Nippertown ties to garner a nomination for the 2010 Grammy Awards, which will be announced on Sunday, January 31.

Woodstock’s own Levon Helm – former drummer with Rock & Roll Hall of Famers the Band – snagged a nomination in the first-time ever Best Americana Album category for his latest CD, “Electric Dirt.”

Saratoga Springs native David Hyde Pierce picked up a Grammy nomination in the Best Spoken Word Album for Children category for his recording of “The Phantom Tollbooth.”

And in the classical music department, the Tanglewood Festival Chorus teamed up with conductor James Levine and the Boston Symphony Orchestra to a record a live performance of Ravel’s “Daphnis et Chloe,” which earned a hat-trick’s worth of Grammy nominations on Wednesday. The recording – the debut album on the orchestra’s new indie recording label, BSO CLassics – earned noms as Best Engineered Classical Album, Best Orchestral Recording and Best Classical Album.

Go here for a complete list of nominees in all 109 Grammy Award categories.

Bill Kirchen, What Was the First Album You Ever Bought?