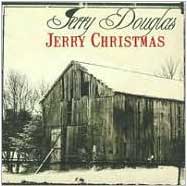 This is not only one of the very best new holiday music albums to hit the racks this year, but it’s a real keeper – one of those increasingly rare new Christmas albums that I’m sure I’ll be returning to year after year.

As you’d probably expect from Douglas – who’s won a gazillion awards for his ever-tasteful instrumental prowess and has been in the “special guest” seat with bands like Alison Krauss & Union Station, as well as Lyle Lovett in recent years – this is an acoustic album that doesn’t fit neatly into any particular pigeon-hole whatsoever.

It’s not exactly country or folk or bluegrass or jazz, but it’s a bit of all of those musical styles organically, seamlessly blended together into a collection of a dozen holiday songs.

In addition to the traditional carols (the opening “The First Noel” to the haunting “In the Bleak Midwinter”), there are also a number of more recent Christmas songs (“Do You Hear What I Hear?” to Vince Guaraldi’s Peanuts soundtrack fave, “Christmastime Is Here”). Douglas tosses in only one new song – his own “Maui Christmas,” a short, bittersweet ballad that’s the only solo peice of the album.

While the album is almost all instrumental, Douglas taps the sublime Maura O’Connell to sing “New Year’s Eve” by unsung Brit singer-songwriter Boo Hewerdine (formerly of the Bible). The album’s only other non-instrumental track features Douglas himself doing such a creepy rendition of “Santa Claus Is Coming to Town” that you’d swear it was an out-take from Danny Elfman’s “The Nightmare Before Christmas” soundtrack.

Jerry Douglas and his band team up with vocalists Maura O’Connell and John Oates (yes, the formerly mustachioed half of Hall & Oates) in support of “Jerry Christmas” at The Egg on Friday (December 11).

George Winston, What Was the First Record You Ever Bought?